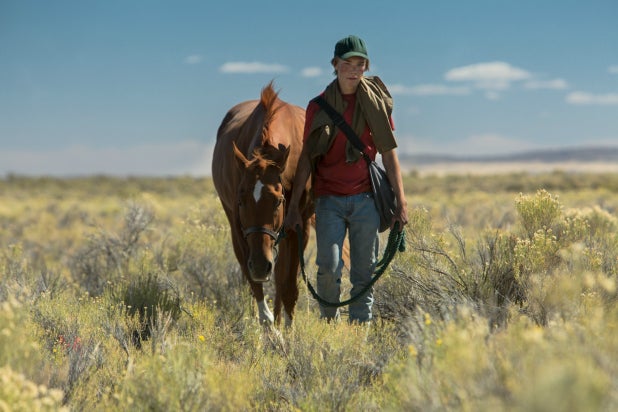 When a European director makes his or her first movie in the United States, you can pretty much rely on two things: the camera’s awe at the wide-open spaces and big skies, and a downbeat story of how the Land of Opportunity so often lets its most helpless citizens fall between the cracks.

So on the American Miserabilism shelf at your local shuttered video store, you can put Andrew Haigh’s powerful and poignant “Lean on Pete” alongside such other classics of the genre as Werner Herzog’s “Stroszek” and Andrea Arnold’s “American Honey.”

“Lean on Pete” calls to mind other greats as well — one imagines a pitch meeting where it was described as “The 400 Blows” meets “Wendy and Lucy” — but writer-director Haigh, working from the novel by Willy Vlautin, has his own way of telling this kind of story. While the film’s semi-picaresque, road-trip nature might seem antithetical to the maker of such intimate dramas as “Weekend” and “45 Years,” Haigh brings his gifts as a filmmaker with him to the great outdoors, always capturing little moments of character and emotion even in an expanse of seemingly infinite American desert.

Teenage Charlie (Charlie Plummer, “Boardwalk Empire”) has just moved to Portland, Oregon, with his ne’er-do-well dad Ray (Travis Fimmel). Mom is long-gone, and Charlie’s only other family is his loving aunt Margy (Alison Elliott, “20th Century Women”), who he hasn’t seen since childhood after she and Ray had a squabble about how he’s been raising Charlie. (When Charlie was 12, Ray left the boy alone for several days to spend time with a woman.)

Their new house is near a racetrack, and Charlie ingratiates himself with small-time horse owner Del (Steve Buscemi), working with him at the stable and traveling with him to seedy races on the state-fair circuit. Along the way, Charlie befriends Bonnie (Chloë Sevigny), a jockey who rides Del’s horses from time to time. Bonnie tries to tell Charlie that the horses aren’t pets, and that he shouldn’t get attached, but it’s too late — he’s already bonded with an aging Quarter Horse named Lean on Pete, even though the racer is coming to the end of his career, likely to be “sent to Mexico” (where horses can be legally slaughtered) once his use to Del has run out.

When the husband of Ray’s latest conquest beats Ray bad enough to send him to the hospital, Charlie has to elude Family Services while still earning money to keep up the household. But as Ray’s condition worsens, and Lean on Pete seems destined to be destroyed, Charlie steals Del’s truck in an attempt to save the horse and to look for Margy in Wyoming.

As you might imagine, Charlie’s journey gets more and more bleak as he faces starvation, thirst and eventual homelessness. But while “Lean on Pete” certainly has its dark moments, and its 119 minutes seem like it’s never going stop throwing obstacles in Charlie’s way, there’s ultimately a sense of hope here, much of it being communicated by Plummer, in an extraordinary performance. There’s so little calculation or actorliness in his work that I thought Haigh had found a 15-year-old non-actor; I was surprised to learn after the fact that Plummer is an experienced pro with an ascendant career. (When I saw the film at the 2017 Venice Film Festival, I had no idea that Plummer was about to play kidnap victim John Paul Getty III in “All the Money in the World.”)

The anguish and determination that Plummer can display with just a look or subtle motion is heartbreaking; this is the kind of naturalistic acting that can just kick you in the stomach. He’s part of a strong ensemble: Buscemi’s Del makes an honest mentor, but he doesn’t sugarcoat the character’s darker side. (And it’s fun to see the easy chemistry between Buscemi and Sevigny: she starred in his feature directorial debut “Trees Lounge” two decades ago.) Steve Zahn turns up as a mercurial homeless man who offers Charlie some help along the way, and Elliott (an indie stalwart since her breakout role in “The Spitfire Grill”) radiates a warmth that makes you realize why finding Margy is worth Charlie’s Herculean effort.

Haigh adjusts to a different kind of storytelling here: “Weekend” was fairly dialogue-heavy (as was, to an extent, his little-seen debut “Greek Pete”), and unlike “45 Days,” he can’t substitute dialogue with a meaningful glance from Charlotte Rampling. Still, he manages a lot of quiet here — with the exception of some exposition dumps that Charlie gives the horse in conversation — and his storytelling is no less powerful. Danish cinematographer Magnus Nordenhof Joenck (“A War”), also working in the States for the first time, collaborates with Haigh to place the characters into a very specific context, finding both beauty and horror in the American sprawl.

Your gut will be wrenched by “Lean on Pete,” but it’s also quite likely that your heart will be touched. It’s a powerful new entry for a director who is ever more deserving of attention, and it provides a spotlight for a talented young actor who would appear to be going places.