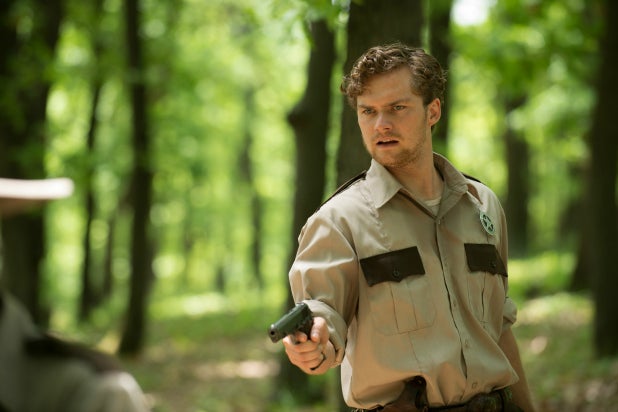 Prequels exploring the early days or formative moments of established characters are not inherently bad, but “Leatherface” is second only to Rob Zombie’s “Halloween” remake in horror’s pantheon of terrible origin stories.

Tackling the formative moments that gave birth to everyone’s favorite chainsaw-wielding hillbilly with less subtlety than the flashback sequence that opens “Indiana Jones and the Last Crusade,” directors Julien Maury and Alexandre Bustillo (“Inside”) lay on visual style as thick as the corn syrup used for their buckets of fake blood while Lili Taylor and Stephen Dorff try in vain to lend dignity to the film’s lousy, anemic premise.

Taylor plays Verna, the domineering mother of the backwoods Sawyer clan, who presents her 10-year-old son Jedidah (Boris Kabakchief) with a chainsaw for his birthday and instructs him to carve up a neighbor accused of attempted hog theft. Jed doesn’t have the stomach for the task, but agrees to become an accomplice in his older siblings’ schemes to reduce the local coed population, resulting in the brutal death of the daughter of Hal Hartman (Dorff), the local sheriff. Without concrete evidence linking the Sawyers to the crime but convinced of their guilt, Hartman declares Verna’s home unfit for children and sends Jed to an institution for youths with behavioral issues.

Ten years later, new nurse Elizabeth White (Vanessa Grasse) is starting at the facility, and bonds quickly with Bud (Sam Coleman) and Jackson (Sam Strike), a shy, lumbering teenager and his well-spoken, respectful protector. But after Verna shows up and unsuccessfully petitions the director for custody of Jed, she breaks into the facility, causing a riot that kills many of the nurses and patients.

Lovers Ike (James Bloor, “Dunkirk”) and Clarice (Jessica Madsen) escape during the mayhem, bringing Elizabeth along as a hostage; a manhunt quickly ensues that puts Elizabeth in the middle of a blood feud between Hartman and Verna, while Bud and Jackson are forced to confront their own violent instincts as they attempt to keep the young nurse safe from harm.

Theoretically, there could be something interesting, or even informative, in learning about the values, experiences and upbringing of an individual who turns out to be a mass murderer. But as Zombie’s “Halloween” demonstrated, origin stories are largely meaningless when the character is meant to be, essentially, a formless embodiment of evil, and can actually undermine their monolithic power by trying to “humanize” them.

Nothing about Leatherface is scarier because as we learn that his family was apparently always a group of homicidal maniacs, or that he was a byproduct of well-below-subpar mental health care. That this is at least the third “explanation” for the character’s appetites and attitudes speaks to the franchise’s already wildly tenuous sense of cohesion, but in any form, the premise of this story only works in opposition to everything that made the original film so chilling and effective.

Meanwhile, on its own merits, “Leatherface” makes up in meanness what it lacks in suspense, populating the film with so many unpleasant characters and moments of brutality that there’s virtually no one to root for. It’s a movie where the fugitives shoot up a diner, flee to an abandoned camper where they find a decomposing, never-explained body, and eventually incorporate the corpse into a sex scene that already involves other disfigured bodies.

Directors Maury and Bustillo are gifted filmmakers, but they betray the sun-bleached 8mm rawness of the original film by using saturated hues that look far too pretty for such an unforgiving landscape. To be fair, this is possibly the best-looking movie about Texas ever shot in Bulgaria, but the square-jawed Eastern Europeans used as supporting players and extras serve as a constant reminder that virtually no one from the production has actually seen the Lone Star State except perhaps on television — and almost certainly not in the movies that preceded this one.

Taylor’s commitment to bringing Verna’s cruelty to life is admirable, but she’s handicapped by the febrile intelligence behind her eyes screaming, “I’m better than this,” not to mention a script that at best reduces the character’s persecution complex to a willful delusion. Dorff may or may not be better than this, but at least he’s given a convincing motivation for wanting to see Verna and the Sawyer clan suffer, lending his rage some sorely-needed substance. Otherwise, the remaining ensemble of mostly unknowns seems to enjoy sinking their teeth into what one would charitably call unilaterally broad characterizations, but their fun comes at the expense of any real suspense or believability.

Gunnar Hansen and others who donned the character’s slaughterhouse garb over the years have revealed their own interpretations of Leatherface as a man-child, bullied by his family, lashing out more in fear than anger. But ultimately, no further psychological examination needs to be done to explain the terrifying imagery of an unstoppable hulk of a man wearing another person’s face, lunging at a would-be victim with a chainsaw.

But even without six intervening installments between 1974 and now, “Leatherface” feels like a distant and empty echo of the original’s transfixing power; a letter in the mail sent months in advance to let you know what the monster looks like, and when he’s coming through the door, doesn’t make him more complex or human. It just makes him boring.