On the dangerous side of swinging London in the ’60s were twin terrors Ronald and Reggie Kray, East End hoods whose glittery personae and violent doings have captivated Brits ever since. Already mythologized once on film in 1990’s “The Krays,” starring Gary and Martin Kemp of Spandau Ballet, the pair are now the focus of writer-director Brian Helgeland‘s slick, empty-headed lark “Legend,” starring Tom Hardy and, thanks to digital magic, Tom Hardy. The beautiful bruiser juggles both roles with a coiled pizzazz that the movie around him never earns.

Bypassing the Krays’ early years as amateur boxers and protection racket up-and-comers, the movie starts square in the thick of their power days running an outfit called The Firm. Very quickly Helgeland marks the twins’ differences: Nattily dressed Reg charmingly chats up housewives on East End streets, cleverly evades shadowing coppers (which include a scowling Christopher Eccleston as nemesis Inspector “Nipper” Read), and starts wooing an associate’s fetching sister, Frances (Emily Browning). Ronnie, meanwhile, has served three years for grievous bodily harm, and needs to take pills to curb his possible paranoid schizophrenia. Quick to lash out and suspicious of confidantes, he’s also truthful to a fault, telling a New York mafioso (Chazz Palminteri) eager to hook him up with any girl he wants, “I prefer boys.”

As for the gangster stuff, Helgeland’s approach is hit-and-run style: a pub brawl with a rival gang (led by an over-the-top Paul Bettany), some shady deals (with David Thewlis’s ass-kissing fixer) to take over nightclubs, and even a sex scandal involving Ron and a conservative politician (John Sessions). The real-life murders that sealed their judicial fate are depicted, and mob movies get shout-outs — Helgeland even cribs the famous tracking shot from “Goodfellas” for a scene in which Reg and Frances grandly enter a club, during which Reg breaks away briefly for some administrative violence before returning to his date.

What would “Legend” be without its hard-working star? It’s tough to say, because you can’t imagine another actor pulling off Hardy’s secret combo of velvety menace and bulldog weirdness, and he’s the only punch to an otherwise standard gangster saga more interested in playboy panache than stick-to-your-ribs nastiness.

See Video: Tom Hardy Shuts Down Reporter Asking About His Sexuality: 'What on Earth Are You on About?' 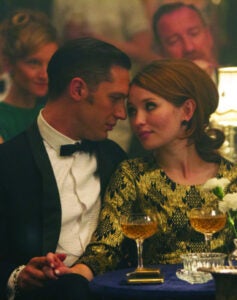 It’s almost patronizing, in fact, how conspicuously the production chose to visually differentiate Ronnie and Reggie — Ron frequently blocky-looking in sweaters, suit vests and half-rimmed glasses, and Reg more elegantly tailored — because Hardy could have done it all with his facial expressions and voice alone. His features as Reg are nearly always GQ-model relaxed (the Krays famously posed for photographer David Bailey), his eyes sharp and intelligent, whereas for Ron he twists that softness into the death glare of a madman. Reg’s voice is a gliding Cockney, while Ron warbles in Bane-from-“The Dark Knight Rises” territory.

It’s fun to watch Hardy double-team this tough guy vaudeville, and aside from one enjoyably Kray-vs.-Kray bro-on-bro fight scene, ending with a tired embrace and Ronnie murmuring that he’s “fragile,” Helgeland’s direction of their shared-scene moments is nearly always mannered. (David Cronenberg‘s “Dead Ringers” did a more graceful job of showcasing one actor’s dual performance so you weren’t looking for the visual effects seams.) Hardy’s virtuosity saves the picture’s artificiality at nearly every turn.

That bravura performance also pinpoints the bigger problem with “Legend,” that it’s a schematic, cartoon depiction of the Krays and their world, with cookie-cutter signifiers to make them individually larger than life: Reg hetero and in love, Ron openly gay and orgy-mad; Reg the sane one attracted to looking legitimate, and Ron the loon enamored of criminal life. The reality is that they were both violent, (probably) bisexual nutters who advertised their gangsterdom as a way of hobnobbing with film stars and politicians.

Also Read: Tom Hardy Is Hugh Jackman's Pick to Take Over as Wolverine

Hardy’s a good enough actor to find the nuances in a pair of interchangeable, close-knit heavies. But “Legend” would prefer to gin things up with a one’s-good/one’s-crazy sibling rivalry/loyalty scenario. The center stage love story between Reg and Frances feels rigged, as well: too perfect at first, then too conveniently used to make Ronnie suspicious/jealous, then a predictable fizzle when Frances finally realizes — again, because it’s handy — what a terrible bloke Reg is.

That their relationship wasn’t romantic and embattled from the get-go is hard to believe; then again, that would have been more complicated to dramatize. If there’s only room for a single dominant woman, one longs instead for the late Billie Whitelaw’s juicy, scary turn as the boys’ mum Violet in “The Krays” to crash these posh, pop song-larded proceedings and scuff things up a bit.

On the technical side, the period décor from Tom Conroy and Caroline Harris’s array of costumes are a visual treat, but they’re so magazine-spread-ready under Dick Pope’s buffed, well-lit cinematography that “Legend” hardly feels like a story of the underworld. It’s gangster showmanship, scrubbed of meaning, even when being sold with style by its magnetic lead.