For any kid growing up in the late ’90s, watching “Legends of the Hidden Temple” was an after-school mainstay. Now, those kids are grown up but are getting another chance to run through Olmec’s temple in The CW’s reboot of the game show — and host Cristela Alonzo promises that the challenges contestants will face have grown with them.

Don’t worry, though; the nostalgia of the original comes along with the new one. That was one of the biggest tasks with the 2021 update — balancing the old and the new.

“We do do a job of recreating and bringing that nostalgic feel to the show, but we also have people that have never seen the show, so we have to do things for them too, to get them interested in watching the show,” Alonzo explained to TheWrap. “I always say that the obstacles, the world, is bigger and more challenging now because it’s for adults rather than kids. But also for the people that grew up watching the show, you’ll see Easter eggs in the show that you’re like, ‘Oh no way!’ and that I can’t wait for people to see.”

Even for Alonzo, who grew up watching the show, stepping onto the set to host was a bit overwhelming. Obviously, there was the pressure of hosting such a beloved show — something Alonzo noted she was acutely aware of — but mostly, it was just the sheer size of everything. 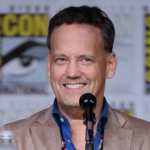 “I remember as a kid watching the show, thinking the whole course, the temple is huge. And then I watch reruns of it, and I’m like, oh, it wasn’t that big. I was just a kid. You realize, oh, yeah, the scale was off,” Alonzo said. “But the cool thing about this property is that people really love it, and it was kind of cool to realize — like, I loved it, I was excited about it. And there was part of me that thought, ‘Wait, am I the only one that would be this excited about the show?’ And then realize, no, there’s a lot of people that really are excited and have missed the show. So I’m glad to be part of it.”

Alonzo now gets to buddy up to Olmec, the legendary stone head from the original game, voiced by its original actor, Dee Bradley Baker. Alonzo admits that the first time she heard her own name come from Olmec, “I got giddy.”

But her own giddiness is nothing compared to that of the contestants, some of whom have dreamed of running Olmec’s temple since childhood.

“[This] first season, a lot of the contestants are coming back. They’re going after their childhood dream of trying to run Olmec’s temple,” Alonzo said. “So you know, you see that joy and excitement. And I think that that’s one of the things that’s really cool about this show coming back, is that there’s actually a chance for you to go back and do the thing you wanted to do as a kid. And for me also, I see that joy in the contestants.

“And I want to make it clear, this show is about the contestants, and about Olmec,” she added. “Like, I get to host it, but my job is to make sure that the contestants get to have that cool moment where they’re running through the challenges, they’re doing everything and they have the spotlight on them. Because that’s part of the appeal of this whole project, that when you grow up sometimes you forget, ‘Hey, I can’t go back and be a kid again.'”