These days box-office victories come with an asterisk, denoting second place to “Avatar.” But Sony/Screen Gems will take it, anyway, in regard to Dennis Quaid horror film “Legion.”

Debuting in 2,476 theaters this weekend, the $25 million R-rated film about angels who get nasty and punitive towards the human race grossed $18.2 million through Sunday, according to three-day studio estimates. That was slightly better than pre-release estimates of $16 million-$17 million for the movie.

Of course, Fox’s phenomenal “Avatar” retained the top spot for the sixth straight weekend, grossing another $36 million – only a 15 percent week-to-week drop – and bringing its domestic total to $552.8 million.

The James Cameron 3D film will likely break the all-time domestic and global records ($600 million and $1.8 billion respectively) within the coming week.

Amid an overall domestic box office that was down about 7 percent from the comparable January weekend last year, according to one studio’s estimate, two other movies opened wide this weekend.

Meanwhile, the debut from CBS Films, “Extraordinary Measures,” also slightly exceeded its pre-release forecast at $7 million. Budgeted at around $31 million, however, this was hardly happy news for Les Moonves’ new film division, which chose to make a heavy drama about a medical researcher (Harrison Ford) who tries to saving a desperate dad’s (Brendan Fraser) dying children. 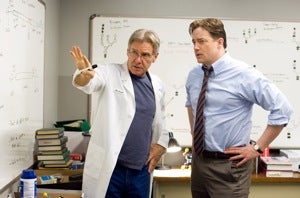 Despite solid word-of-mouth evidenced by an A-minus Cinemascore grade, CBS Films executive VP of distribution Steven Friedlander conceded it has been challenging to convince “Americans to see a movie about a guy trying to save his dying children.”

However, the movie played well enough in the Heartland, he noted, to provide CBS Films officials some hope of reaching the black. “If you look at the Rentrak map and you compare it to the 2004 Presidential campaign, we’re the red states,” Friedlander said.

He also believes the division’s business plan of leveraging CBS’ broad promotional assets, which include everything from outdoor to radio to gas-station kiosks, showed its potential.

“We got a lot of bang for our buck,” Friedlander added. “CBS was very supportive of us.”

In any event, he said he’s hoping for better results when CBS Films rolls out Jennifer Lopez romantic comedy “The Back-up Plan” in April.

“A romantic comedy will make it easier for us to get into the marketplace,” Friedlander said.

Meanwhile, other box-office highlights included Fox’s “Alvin and the Chipmunks” sequel passing the $200 million mark in North America with a $6.5 million performance this weekend.

And finally, after 10 weeks, Warner’s “The Blind Side” fell out of the top 10, bringing in a still-potent $4.5 million. It’s cumulative domestic total now stands at $234 million.

Here’s how the top 10 at the domestic box office shapes up this weekend: