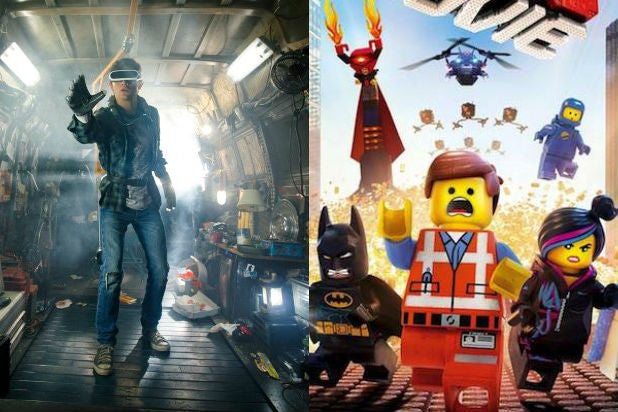 (Note: This post contains spoilers for “Ready Player One.”)

If you’re a fan of Steven Spielberg’s hit film “Ready Player One,” I get it. On the surface it’s hard to hate on the idea of a film packed with nostalgic callouts to old pop culture, plus a message of friendship, acceptance, and the value of real life versus escapism.

But that’s on the surface. Ultimately, the larger messages and themes are just backdrop to cool visuals and a ton of references, the references don’t really amount to anything except a list of things audiences probably like, and the film’s characters largely just define themselves mainly by liking that stuff.

But what if we told you there was a far superior version of “Ready Player One” that is all of that and much more, and also came out four years earlier? There is: it’s called “The LEGO Movie.”

Both “Ready Player One” and “The LEGO Movie” are epic adventures about playing in a fantasy world populated by characters owned largely by Warner Bros., dressed up in more meaningful messages to dilute the consumerism. And both films feature deliberately uninteresting protagonists who seem defined largely by their interests. But that’s where the similarities basically end.

The main character of “Ready Player One,” Wade (Tye Sheridan), proudly likes the right things — “Back to the Future,” “Buckaroo Banzai,” “Monty Python and the Holy Grail,” “The Shining” and so on. It’s part of his quest to win riches by solving a puzzle at the heart of the online virtual world OASIS, essentially an enormous online video game. But while OASIS is a place where you can supposedly “be anything,” the things that people most often end up being are the creations of other people, and owned by other people.

The mess of characters running around the OASIS — and there’s a lot of them — aren’t made interesting in some way by being used by the players who inhabit them. They’re just quick shots of things you’ve seen before. “The Iron Giant,” the DeLorean from “Back to The Future,” and so on.

But where liking the right stuff and knowing everything about it is a virtue (and Wade’s whole life) in “Ready Player One,” “The LEGO Movie” uses that idea as a jumping off point. The film follows regular guy Emmet (voiced by Chris Pratt) who, like Wade, likes everything everyone else likes and defines himself by his conformity.

But unlike Wade, Emmet spends the movie figuring out his own identity. The entire plot of “The LEGO Movie” is Emmet finding what makes him unique, an idea taken even further when it’s revealed the entire story is a game being played by Finn (Jadon Sand), a real-life kid. The main conflict of the movie — that LEGO character President Business (Will Ferrell) wants to destroy the universe with the “Kragle,” a bottle of Krazy Glue — is actually a metaphor for Finn’s father wanting to freeze his LEGO sets into permanent finished states. The film eventually has Finn’s father realize that his son is using the toys to create for himself, and to express his individuality.

Meanwhile, even as it makes use of a references to the Warner Bros. stable — DC superheroes, Gandalf from “The Lord of the Rings,” Dumbledore from “Harry Potter” — “The LEGO Movie” goes a step further than “Ready Player One.”

“The LEGO Movie” jokes that Superman would ghost an annoying fellow hero, that Batman would be an insufferable narcissist, that Gandalf and Dumbledore don’t have time to shepherd every random hero through his or her origin story. These aren’t just shoutouts to random characters, they’re subversions of viewer expectation. Your understanding of the source material is expanded, not just catered to.