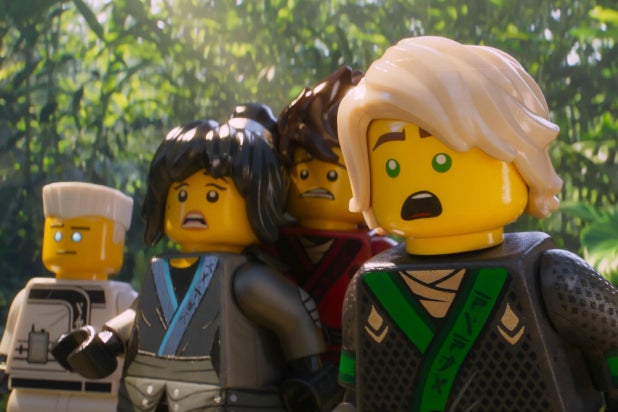 “You must forget everything you know,” a mysterious pawn shop owner (Jackie Chan) intones, as he tells a little boy the wondrous story of Ninjago. You’ll probably enjoy the experience more if you’re able to take his advice, too.

“The Lego Ninjago Movie” does fit into the decidedly silly, self-aware sphere of the Lego movie franchise. Comparisons won’t help it any, though: unlike the two previous entries, this one feels a little worn around the edges. But while parents may miss the second-level smarts of its predecessors, kids should fall right into the fun.

A lot of the credit goes to Justin Theroux, who carries much of the comic load as the voice of Lord Garmadon, a villain as inept as he is evil. Garmadon is perpetually determined to conquer the neighboring island of Ninjago, which has made things super frustrating for its peaceful citizens. Think of him as a bungling cross between Darth Vader and … well, any other self-satisfied and appallingly amoral leader who may come to mind.

No one suffers more than Lloyd Garmadon (Dave Franco), his teenage son. Lloyd, who takes after his mom (Olivia Munn), is actually a force for good: a secret ninja who suits up with his buddies to fight every new attack from his father. But because no one knows about his double life, Lloyd is almost universally hated beyond his ninja crew of Nya (Abbi Jacobson), Kai (Michael Peña), Jay (Kumail Nanjiani), Zane (Zach Woods), and Cole (Fred Armisen).

When Garmadon makes yet another attempt to vanquish Ninjago, a furious Lloyd can’t help acting out. But unlike most teen tantrums, this one has pretty big consequences: Lloyd lets loose “the Ultimate Weapon,” the reveal of which is too amusing to spoil here.

Alas, the results are disastrous not for Garmadon, but Ninjago. So Lloyd’s got to fix things by finding “the Ultimate Ultimate Weapon,” which is hidden deep in the woods. He can only achieve this near-impossible mission with help from the wise Master Chu (Chan), his fellow ninjas, and … his father.

So far so good: co-directors Charlie Bean, Paul Fisher and Bob Logan take us down the familiar Lego path with humor, first-rate animation and strong fight scenes that make the most of the Ninjago dragons and mechs (i.e., giant moving weapons).

Once the movie prioritizes emotion over action, though, the pacing falls off. The father-son stuff is entertaining, at first, with many of the highlights centered around Garmadon’s utter paternal cluelessness. But midway through, as characters keep pausing to learn predictable lessons, the film begins to feel bloated and a little aimless.

It’s disappointing, too, that most of the ninjas seem generic and interchangeable. Surely someone amid the three directors and nine writers could have found a way to take advantage of so many comic talents.

As for die-hard Ninjago fans, they may not be thrilled that the Lego team clearly put more effort into honoring the specifics of the DC Universe with “The Lego Batman Movie.” But, of course, the Ninjago ninjas aren’t instantaneously recognizable superheroes, and it does make sense to widen the concept’s appeal.

In fact, it feels like an asset that young viewers don’t need to know anything about Ninjago to enjoy this entry in the franchise. I was joined by a 9-year-old whose tastes run more towards Lego Friends sets, and she wanted to see the movie again as soon as the lights came up. Once was enough for me. But I am hoping Theroux’s Lord Garmadon gets a cameo in the upcoming “Lego Movie” sequel.