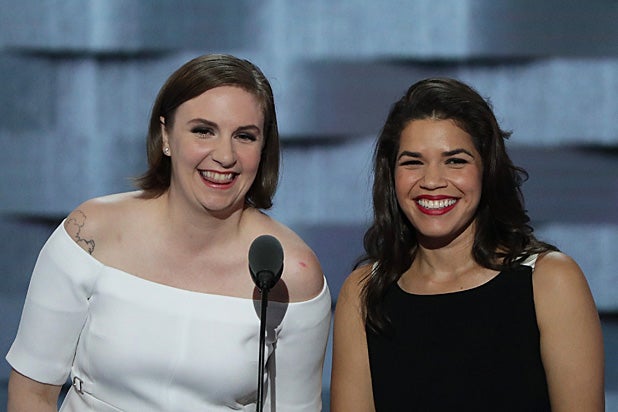 Lena Dunham took the podium at the Democratic National Convention Tuesday to say Donald Trump probably considers her “like, a 2.” Then America Ferrera volunteered that “according to Donald Trump, I’m probably a rapist.”

“And President Obama isn’t Kenyan,” said Ferrera, whose parents are from Honduras.

It was just the sharp opening of a very fast-quipping double act, one that landed digs quickly in an appeal to young women voters.

“We know what you’re all thinking,” said Dunham. “Why should you care what some television celebrity has to say about politics?”

“And we feel the same way,” said Ferrara. “But he is the Republican nominee, so we need to talk about him.”

The convention also featured a series of videos in which the former “Apprentice” star rated women based on their looks and suggested there may be a time when they can no longer get legal abortions — but can pay extra for illegal ones.

Dunham said Trump wishes for a time when women were supposed to be “beautiful and silent.” The pair said Trump wants to divide people and set women back.

They were just the funniest of many celebrities who took the Democratic convention stage Tuesday, including “Hunger Games” star Elizabeth Banks and “Scandal” star Tony Goldwyn.