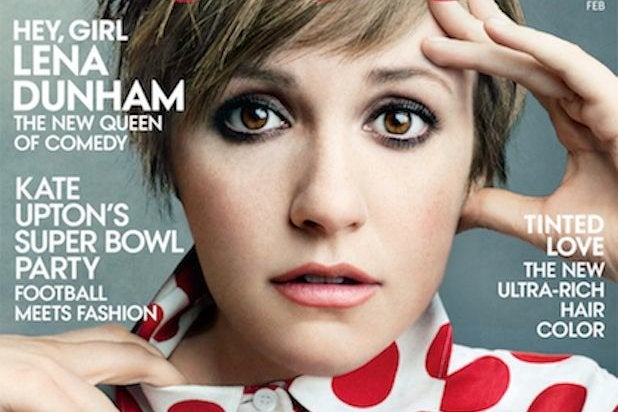 Lena Dunham is the “new Queen of Comedy,” according to the new cover of Vogue that features the “Girls” creator.

While the 27-year-old actress, writer, director and producer wasn’t exactly comfortable talking about the frequent display of nudity on the HBO comedy series at a Television Critics Association panel last week, she had plenty to say on the subject in Vogue’s February spring style issue.

Season 3 of “Girls” premiered on Sunday, and yes, there was skin. Last season, it wasn’t just the nudity that became a talking point, but who she got naked with, specifically guest star Patrick Wilson.

“Critics said, ‘That guy wouldn’t date that girl!’ ” Dunham explained. “It’s like, ‘Have you been out on the street lately?’ Everyone dates everyone, for lots of reasons we can’t understand. Sexuality isn’t a perfect puzzle, like, ‘He has a nice nose and she has a nice nose! She’s got great breasts and he’s got great calves! And so they’re going to live happily ever after in a house that was purchased with their modeling money!’ It’s a complicated thing. I want people ultimately, even if they’re disturbed by certain moments, to feel bolstered and normalized by the sex that’s on the show.”

That sounds like the answer TheWrap was looking for last week.