The tortured love ballad "Stormy Weather" was her signature song, but its title more aptly described the career of legendary jazz singer Lena Horne, who died of undisclosed causes on Sunday at NewYork-Presbyterian Hospital. 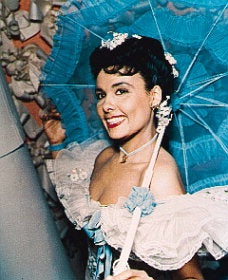 She was one of the first black performers hired to sing with a major white band, the first to play the Copacabana nightclub and among a handful with a Hollywood contract.

Yet she still was criticized for refusing to sing for segregated audiences when she entertained the troops during World War II, and was restricted mostly to roles in films and theater that had all-black casts or patched together musical vignettes where the races never mixed.

She even lost her most coveted film role, that of a mulatto in the 1951 remake of "Show Boat," because the story featured an interracial couple.

Ironically, she was so light-skinned that her studio, MGM, created a makeup, Dark Egyptian, so that she would photograph darker. And when Hedy Lamarr played a half-caste African in 1942's "White Cargo," they gave her Horne's makeup to darken her skin.

The great-granddaughter of a freed slave, Horne was born in Brooklyn on June 30, 1917, the daughter of a gambler father and show-business mother. Raised by her grandparents, in the fall of 1933 she dropped out of school to join the chorus line of the Cotton Club in New York City.

After years touring as a band singer, she settled down in New York, playing on Broadway in “Lew Leslie’s Blackbirds of 1939.”

A couple of years later, she replaced Dinah Shore on NBC's jazz series “The Chamber Music Society of Lower Basin Street.” She left after signing on for a run at the new Trocadero nightclub on the Sunset Strip, but it never opened. She played in a number of small clubs, then moved on to films, signed to MGM.

That year, critic Frank Nugent called her “the nation’s top Negro entertainer,”  and she was making $1,000 a week at MGM.

During World War II, she was a regular on the Army radio program “Command Performance.”

“The whole thing that made me a star was the war,” she later said. “Of course the black guys couldn’t put Betty Grable's picture in their footlockers. But they could put mine.”

Similarly, most of her movie roles were either in all-black films like "Cabin" or in musical revues.

"I was always battling the system to try to get to be with my people," she once said. "Finally, I wouldn't work for places that kept us out. … It was a damn fight everywhere I was, every place I worked, in New York, in Hollywood, all over the world," she said in Brian Lanker's book "I Dream a World: Portraits of Black Women Who Changed America."

In the '60s, she became an activist for civil rights. She was at an NAACP rally with Medgar Evers in Jackson, Mississippi, the weekend before he was assassinated. She also was at the March on Washington and worked with Eleanor Roosevelt to pass anti-lynching laws.

“The only time I ever said a word to another actor who was white was Kathryn Grayson in a little segment of ‘Show Boat,’”  that was included in the film "Till the Clouds Roll By," about composer Jerome Kern, she said. In the segment, she played the role of the mulatto Julia.

When "Show Boat" was made into a film for the second time in 1951, she wanted to be considered for the role but ws rejected because of the Production Code's ban on interracial relationships. She lost the part to Ava Gardner, who practiced to Horne's recordings but whose voice was later dubbed.

For a time in the '50s, like many left-leaning performers, Horne was blacklisted; she was cleared of all charges.

She eventually gave up film work and continued with a successful career in recordings, nightclubs and TV.

In 1957, she starred in the all-black "Jamaica" on Broadway; in 1974, she and Tony Bennett appeared on Broadway in "Tony and Lena"; and in 1978 she played the role of Glinda the Good Witch in the all-black film "The Wiz," starring Diana Ross and Michael Jackson.

In 1976, she published her autobiography, "Lena," and in 1981 she won a special Tony Award for her one-woman show, "Lena Horne: The Lady and Her  Music," in which she talked openly about her career and the discrimination she faced.

In 2007, Leslie Uggams played Horne in the musical "Stormy Weather."

She had two children with Jones, a son, Edwin, who died at 30 in 1970 from kidney disease, and a daughter, Gail, whose daughter Jenny, with one-time husband filmmaker Sidney Lumet, wrote the award-winning screenplay for "Rachel Getting Married."