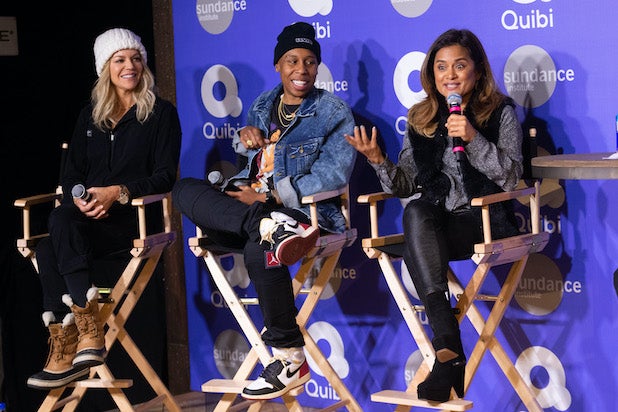 Just a few weeks ago, Jeffrey Katzenberg and Meg Whitman were at CES giving the first look at the technology behind their new mobile streaming platform Quibi. Friday at Sundance however, Katzenberg moderated a panel of creators Lena Waithe, Kaitlin Olson and Veena Sud to give a taste of what you’ll actually be able to watch on it.

Waithe, Olson and Sud joined Katzenberg to talk about their specific projects that will appear on the platform when Quibi launches on April 6. Their projects are just a few of the dozens of shows that have already been announced so far and the 175 original shows in all that Katzenberg says will be available on the platform.

Waithe, who has a documentary series about the culture and commerce of sneakers called “You Ain’t Got These,” imagined a scenario where, in the five minutes when you’re waiting in line at Starbucks, instead of browsing social media and feeling depressed, you get to the front of the line and instead feel “enriched.”

“You’re enriched and empowered instead of defeated,” Waithe said on the panel on Friday at the Chase Sapphire Lounge at Sundance.

Also Read: Chance The Rapper to Host Reboot of MTV's 'Punk'd' on Quibi

Olson didn’t mince words about the appeal of the platform for creators. Creating her comedy show with Will Forte called “Flipped” was only a month of work, it was with Katzenberg, you have ownership afterwards, and it’s “a lot of money.”

The “Always Sunny” star alluded to her time working on a previous show away from FX as an “uphill battle,” one in which she felt like she was questioned at every turn by executives.

“I really never saw any Quibi executives ever again,” Olson said after completing the initial table read. “We didn’t have any,” Katzenberg joked in response.

Also Read: Laura Dern to Star as a Bartender With a Sympathetic Ear in New Quibi Series

But Veena Sud, the executive producer on “The Killing,” perhaps gave the best examples of how Quibi’s mobile format is being optimized for their shows. Her episodic short film is called “The Stranger,” which stars Maika Monroe and Dane DeHaan in the story of an LA Uber driver who picks up a sociopath killer.

The 13-episodes of the show will become available on your phone once a day, but Sud explained that the show could drop later and later into the night with each installment. The show might arrive as early as 2:00 a.m., and it would appear on your phone with the same eerie text message sound that the character hears when she’s receiving a message from the killer.

Sud said her experience with traditional cable television has trained her to approach shows with a slow burn and dense plotting. But the format of Quibi demands more immediacy, and Sud said each episode is designed to give you a “primal feeling” and “interactive viewing” experience rather than a passive one.

Also Read: Why Neon Is the Indie to Watch at Sundance After 'Parasite' and 'Honeyland'

To that point, Katzenberg explained that each project they take on must adhere to three rules. In addition to the mandate that no show is longer than 10 minutes, a show must (1) grab your interest and attention within the first shot or moments, (2) it needs to “wow” you in some context” and (3) each episode needs to end with a hook that leaves you hanging on for the next installment.

Katzenberg also performed a brief demonstration of the “Turnstyle” technology that was introduced at CES, demonstrating that shows are designed to look good in full screen whether you rotate your phone horizontally or vertically, even switching aspect ratios as the show is playing.

Sud said working within this 9:16 aspect ratio created some new challenges for the actors, who would have to shift slightly to capture the same moment of story and would often find themselves looking directly into the camera. Sud said it often created an unsettling “FaceTime” effect that was ideal for her horror-thriller story.

But all three filmmakers loved the freedom they had from the Quibi team and the privilege to own their own content. Waithe said she hopes her documentary short could actually be resold and packaged as a traditional feature-length documentary or docu-series, but the 10-minute constraints of Quibi forced them to be “very mindful” of their real estate.

“I want you to build an empire too,” Waithe said of Katzenberg’s pitch to her about ownership of content. “And I would love getting paid for something twice.”