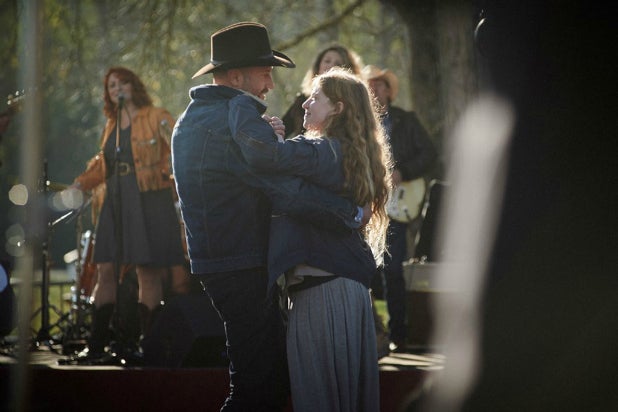 The French dramatic thriller “Les Cowboys” has a scope and ambition as wide as the open range, but it’s a bumpy journey following a modern-day father’s pained quest to find his missing teenage daughter. Screenwriter Thomas Bidegain, making his feature directorial debut after collaborating on noteworthy screenplays with Jacques Audiard (“A Prophet,” “Dheepan”), is in territory reminiscent of Audiard’s brand of tough emotionalism.

The twisty story calls up John Ford’s “The Searchers” and Paul Schrader‘s “Hardcore,” and touches on the War on Terror while remaining distinctively European in its aesthetics and tone. That’s a hefty set of ingredients to make work, and though Bidegain’s effort has its moments, it never gels into a cohesive, intimate-yet-expansive whole.

Then suddenly, hours later, she’s nowhere to be found, and a father’s smile turns — and sets — into an obsessive’s narrow-eyed glare as it becomes clearer that Kelly has run off with a secret Muslim boyfriend named Ahmed who may have radicalized her. A brutally effective scene encapsulates Alain’s doomed bullheadedness: Acting on a tip in a nearby town, he finds a little girl in a hidden Muslim trailer enclave wearing the red neckerchief Kelly was last seen wearing and starts yelling at her, only to be chased off by the encampment’s men. Naturally, they’re all gone when he returns with the authorities. Bidegain cuts to Alain’s clenched fist on the bandana, a shot that suggests this may be as close as this steely but self-destructive father ever gets to finding his missing child. 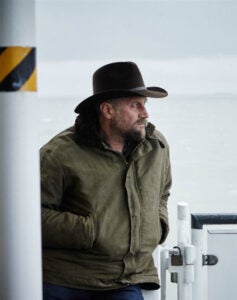 But Bidegain has more to show and tell as the years pass — with each slow fade-out comes a jump forward in time — and this ever-consumed dad ropes the now-grown Kid (Finnegan Oldfield, “Bang Gang”) into the hunt, which spills over into other countries. When 9/11 happens, the movie shifts entirely to Kid, who becomes an aid worker in Pakistan, mostly to deepen the search for Kelly. He crosses paths with a mysterious American from the private sector (a commanding, tersely cynical John C. Reilly), and eventually a widowed Muslim woman (Ellora Torchia), whose plight softens the resolve instilled in him from his father.

“Les Cowboys” is not only split in halves, it also frequently feels like two films smashed together: a chase narrative, and a meditation on how the gap between looking for and finding can become a soul rot. This was also, of course, the hybrid that was “The Searchers,” but Ford was more skillful at merging pulpy narrative and the poisoning vibe emanating from John Wayne‘s racist avenger.

When Bidegain zeroes in on his driven dad, there’s a psychological clarity to “Les Cowboys”: It’s a simple portrait, but it packs an ironic punch. That has a lot to do with Damiens, an actor mostly known for comedy in France. Here, however, he easily embodies a gale force of a man whose love of the western lifestyle gives him a sense of community, but whose corrupting single-mindedness, stoked by xenophobia, threatens the unity of those closest to him.

There’s also power in the visuals, courtesy of cinematographer Arnaud Potier (“5 to 7”), who does a fine job with widescreen images of constriction and independence, whether in confined spaces or surrounded by western or eastern mountains. But as Bidegain’s yarn spins out from a family psychodrama in rural France to a Middle East adventure — complete with a gun showdown and a jail rescue — “Les Cowboys” starts to feel more unwieldy than illuminative.

Plot strands that set up the ruminative final act feel stretched beyond the point of credibility and reasonable motivation, leaving Kid as more of a narrative game piece than a fully formed character. His sense of loss — set up as more nuanced — should build upon the blunt force damage of his father’s. But the story’s forced contortions take center stage in order to maintain tension, although a few well-turned scenes at the end do their best to right the ship.

As uneven as it is, “Les Cowboys” nevertheless shows promise for Bidegain as a filmmaker with complexities on his mind and big territories to explore.