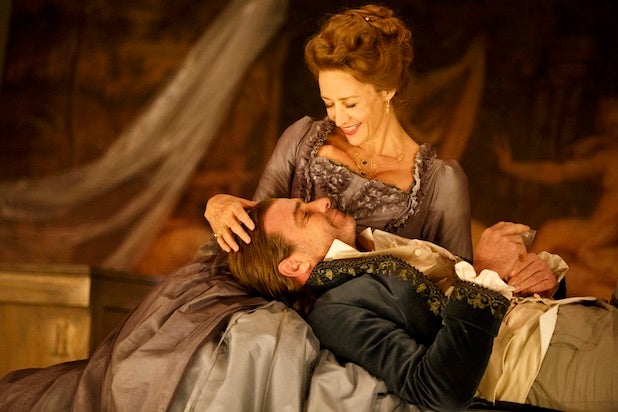 In Christopher Hampton’s “Les Liaisons Dangereuses,” the eighteenth-century aristocrats are supposed to be speaking French but for our benefit communicate with each other in English. So why are the many American actors in the new Broadway revival, which opened Sunday at the Booth Theatre, talking with an English accent? Or if not English, a mid-Atlantic accent that’s pushed so far to the east that they’ll wash ashore in Cornwall any day now?

In Liev Schreiber’s eccentric performance, this audio disconnect provides one of the few pleasures in what is otherwise a lethargic production, one that originated at London’s Donmar Warehouse under the direction of Josie Rourke. Schreiber sounds as if Laurence Oliver’s tenor is fighting Richard Burton’s baritone, with all of this disharmony emitting from the esteemed American actor’s great granite face.

The Vicomte de Valmont (played by John Malkovich in the 1988 movie version of “Liaisons”) has taken it upon himself to seduce two virtuous women, Madame de Tourvel (Birgitte Hjort Sorensen, or Michelle Pfeiffer in the movie) and the virginal Cecile Volanges (Elena Kampouris having just graduated from kindergarten, or Uma Thurman in the movie).

Valmont’s erstwhile paramour the Marquise de Merteuil (Janet McTeer, or Glenn Close in the movie) masterminds these seductions out of some perverse sense of fun and revenge. McTeer can best be described as arch in her overly mannered approach to the character’s mechanizations. It’s an interpretation that leads her to deliver every one of Hampton’s epigrams as if they were written by Oscar Wilde, which they unfortunately were not.

Since there’s no subtext at work here — the Marquise is actually still madly in love with Valmont — her hysterics in act two ring even more false than her many hand gestures, illustrating not every word but often individual syllables, and her wild tilts of the torso and head that sometimes send her body in opposite directions. The actress often grabs hold of furniture or the upstage wall to keep her balance, as if impersonating a hotel during a Tokyo earthquake.

While McTeer reprises her performance from the Donmar, Sorensen is new to the production and Broadway. She makes one pine for Pfeiffer. When Valmont here expresses his ecstasy at finally making love to Madame de Tourvel, he must be recalling a recent viewing of “Dangerous Liaisons” on his DVR. Only Mary Beth Peil, playing Tourvel’s wise aunt, brings the requisite grace and wry understatement to her performance.

As presented here, the Hampton play turns into another of those British middle-brow dramas masquerading as high art. To stress that pretentiousness, Rourke commissioned Michael Bruce to write a score that has the supporting players mouth some pre-recorded sopranos vocalizations during the production’s many scene changes.