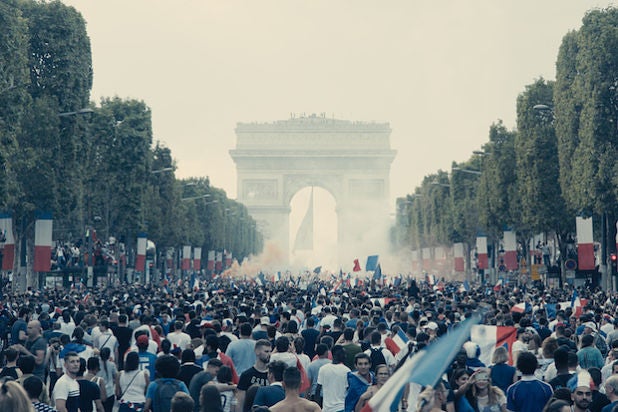 Last July, the city of Paris echoed with cries of joy as thousands upon thousands took to the streets to celebrate their country’s World Cup victory over Croatia. The moment of social unity did not endure, but it left a lasting impression — shots of the celebrations play as an overture for Ladj Ly’s “Les Miserables,” which premiered at the Cannes Film Festival in October and opens Friday, Nov. 29.

Mind you, the French director does not linger on the punch-drunk joy for very long; he is, after all, more interested in the hangover that would soon follow.

With his feature debut, Ly sets out to explore the various social and economic fissures that could take a society from collective triumph to revolutionary anger over just a matter of days – fissures that are hardly limited to France, and, as the Victor Hugo-evoking title would suggest, in no way unique to the 21st Century.

Set in same working-class suburb where Hugo situated much of his 1862 masterpiece, “Les Miserables” assumes the broad outlines of a “Training Day” like police thriller – following a wet-behind-the-years rookie and his trigger happy partners on one hellishly bad first day on the job – and uses it a springboard to flesh out a community while tracing its numerous fault lines.

As broadly described, the script wins few points for originality: After we spend the first act setting up the various factions and navigating the unexpected hierarchies between dealers, clerics, cops and Roma, things kick into high gear when a local youth captures a moment of police brutality, and all parties fight like hell to get hold of the tape.

Of course, Ly rather cleverly inoculates his film to charges of repetition by outright owning them. Of course, you’ve seen stories like before. The film freely admits, these exact same stories, these preventable tragedies and pointless injustices have been manifesting themselves for hundreds of years.

Also Read: 'On Broadway' Film Review: Documentary Offers Neon Lights But Not Much Else

What varies, then, are the specifics, the individual lives caught in the ever-turning gears. And on that front, the film excels, considering each faction with both empathy (which is common in a film like this) and a generous sense of humor (which is really, really not) that speaks to the director’s profound understanding and affection for a suburb that even many in France would flippantly consider a “no-go zone.”

Ly, who is the part of the same forward-thinking film collective that produced Romain Gavras, Vincent Cassel and the “Faces Places” co-director JR, conducts the proceedings with sharp formal acumen and openness to new technology. He alternates between sequences shot with a handheld, whiplashing camera and ones captured by an airborne drone, the uncannily steady images of which only reiterating that sense of grim determinism.