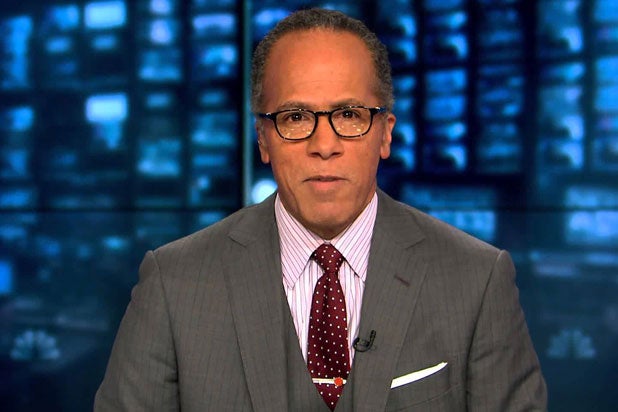 NBC News has named Lester Holt as the permanent host of “Nightly New,” making him the first African American solo anchor of the evening news.

Holt’s acension spells the end of Brian Williams‘ tenure as anchor, which he served as from 2004 to February, 2015 before the scandal revolving around his reporting exaggerations broke.

Holt, on vacation, took a break to tweet about the good news.

Promised my family I wouldn’t think about work during vacation. Just got the ok to break that promise. Excited and grateful for new role.

He also issued a statement through NBC News.

“This is an enormous honor,” Holt said. “The respect and admiration I have for the Nightly News team has only grown deeper over the last several months that we’ve been together. Day-in and day-out under an uncomfortable spotlight they have produced world-class journalism. I’m very proud and grateful to be part of such an unflappable and dedicated team of professionals as we move forward together.”

“He’s an exceptional anchor who goes straight to the heart of every story and is always able to find its most direct connection to the everyday lives of our audience,” Lack continued. “In many ways, television news stands at a crossroads, and Lester is the perfect person to meet the moment.”

Holt stepped in to the anchor chair in February as the substitute for the suspended Brian Williams, holding down the fort admirably since albeit conceding “Nightly News'” five year total viewers winning streak to ABC’s “World News Tonight” with David Muir in March.

It’s been a seesaw battle between NBC and ABC for total viewers for months, with the two trading places week to week. Holt has anchored with no marketing or promotion of him as the anchor while NBC News conducted its investigation of Brian Williams‘ previous reporting.

Now that he’s the guy, there will surely be a widespread promotional push to introduce Holt to viewers who might not have ever watched him.