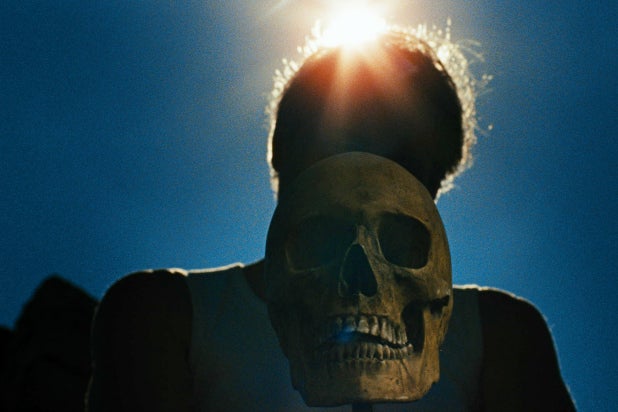 “Let the Corpses Tan” tells you right away what it’s about. It’s about painting with bullets. And what a beautiful picture it makes.

The third film from directors Hélène Cattet and Bruno Forzani is, like their previous works “Amer” and “The Strange Color of Your Body’s Tears,” a reinvigoration of cult European filmmaking. The so-called “Eurosleaze” works of sensuality and violence that are sometimes celebrated, and sometimes rudely dismissed. The filmmakers seem to find within these allegedly outdated genres a fantastic inspiration, and they use iconic color timing, bold camera angles, and vibrant music to get away with telling stories so shocking, they probably wouldn’t be acceptable otherwise.

Elina Löwensohn (“Nadja,” “The Wild Boys”) stars as Luce, a conceptual artist living off the coast of the Mediterranean Sea, where she sculpts with skulls and smears brightly colored paint on canvas, before inviting her guests to shoot at her work. Her guests this week are strangers, invited to provide her with inspiration. She doesn’t know it yet, but they are dangerous criminals who are using her isolated commune as a hideout from their latest bloody heist.

The police show up, investigating on a hunch, and find themselves in the middle of a battleground. High-powered weaponry blasts into the rocks and ruins, and betrayals within the ranks make everyone a target. The criminals are after a shipment of stolen gold. The cops are after justice. And Luce is having the best weekend imaginable, because she loves anarchy, she hates cops, and it’s all too much fun to let it stop.

“Let the Corpses Tan” features a lot of men shooting at each other, but it doesn’t seem to have been told from their perspective. The violence is beautiful to behold, but it’s not heroic or even masculine. It’s being brushed onto the screen by storytellers who seem to be arguing that art itself is violence, and by extension, violence is a perversely fascinating form of art. Cattet and Forzani may be directing the movie, but Luce is directing the action, and her obsession with human eroticism and savagery, both of which require the same meat, is troublingly beautiful.

Every part of “Let the Corpses Tan” seems to be in a state of arousal. Cigarette lighters don’t light, they form miniature explosions. Ash doesn’t fall, it rains in curvaceous wisps of flame. Guns don’t just fire but spit out of sensuous mouths. And when characters fantasize, they fantasize about gold-gilded, champagne-soaked crucifixion, or of having their clothes shot off of their bodies in sputtering flashes of ammunition.

The connection between beauty, sex, and violence is often expressed by action movies, but “Let the Corpses Tan” seems to know every nook and cranny of that intersection, between grindhouse and arthouse. Style isn’t a place to hide; it’s the place where Cattet and Forzani want to have this conversation. The eroticization of brutality can’t be explored in the abstract; it must be witnessed in order to be truly considered. And when witnessed through the female gaze, it’s exciting, exhausting, and unlike any other shootout film before it.

Also Read: 'Suspiria' Remake Will Haunt You For Whopping 152 Minutes

“Let the Corpses Tan” is the kind of throwback that never winks at the audience, or calls attention to its modernity. Cattet and Forzani never pretend that they’re better than their material. They aren’t mimicking Euro-sleaze, they’re resurrecting it in front of our eyes and pushing it forward in new, conscious, intriguing directions.

With “Amer,” “The Strange Color of Your Body’s Tears” and now “Let the Corpses Tan,” there is an excellent argument to be made that Cattet and Forzani are the most visually arresting filmmakers working today. They compose their films out of such distinctive, unusual and extreme images that it’s amazing they can be cut together at all, let alone in a way that entrances the audience. It takes an astounding amount of confidence to make an action movie out of tight close-ups, silhouettes and darkness, and they’re up to the challenge.

Then again, that challenge may prove difficult for some audiences. It’s easy to accept “Let the Corpses Tan” as an empty exercise in style if you’ve never seen anything like it, and don’t know how Cattet and Forzani are modifying pre-existing genres to present new ideas. The despicable, shiny, squeaky black leather that Giallo fans instantly associate with the evils of a Dario Argento villain are revealed, quite surprisingly, to be the fetishistic uniform of the film’s police officers. The heroes wear the trappings of villains, and violence is always sexual, even when it’s institutionalized.

Another brilliant little gimmick: “Let the Corpses Tan” slams the time of day on-screen, repeatedly, and so arbitrarily that you assume it’s some kind of joke. It couldn’t possibly matter at what exact minute this barbecue takes place, but Cattet and Forzani are preparing you for a big reveal. You will eventually need to know exactly when every single thing takes place because a shootout this complicated requires you to watch every second, from every perspective.

“Let the Corpses Tan” is high-octane high art. It’s incredibly violent. It’s unexpectedly playful. It’s strikingly sumptuous. And its depths could easily be mistaken for shallow stylistic overtures. But if you examine the surface more closely, you’ll discover it’s impressively smart. It may be one of the most rapturous movies of its kind.