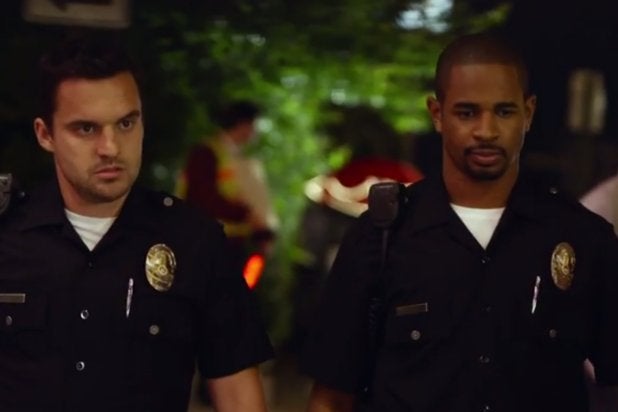 Fox’s “Let’s Be Cops” continued a solid opening week, taking in $3.2 million at the box office on Thursday.

Also read: ‘Let’s Be Cops’ Review: Jake Johnson and Damon Wayans, Jr. Have Too Few Good Jokes in Their Holsters

The Thursday gains give the pic $8.4 million gross headed into the weekend. Overall, it looks to take in $25 million in its opening five-day frame, in 2,936 theaters in the U.S. and Canada. That would give Fox a solid late-summer hit made on a low budget by director Luke Greenfield.

Also read: How Much ‘Expendables 3’ Box-Office Booty Will Pirates Take?

Elsewhere, the third “Expendables” film made $875,000 in late Thursday night showings, on 2,200 screens, which puts it on track thus far with the first two films in the geezer action franchise. The original made $870,000 in its opening evening, while the sequel earned $685,000. The first two pictures, however, screened only at midnight, giving this latest Sylvester Stallone-led adventure more time to earn a similar return.

It remains to be seen how the mass piracy of the film, which was leaked on various torrent sites, will impact its box office returns. The original film made $34 million in its opening weekend, en route to $103 domestic and $274 million worldwide. The sequel slumped to a $28 million opening and $85 million overall in the US, but $305 million worldwide.

For those too young to see “The Expendables” but still want a taste of dystopia, “The Giver” is premiering from Walden and Weinstein in 3,003 theaters. The long-awaited adaptation of Lois Lowery’s classic YA book stars Meryl Streep, Jeff Bridges, and Brandon Thwaites. It made $750,000 on Thursday night and is expected to make in the mid-teens.