The youthful romantic drama scored plenty of buzz when it was screened recently at ShoWest, but a small production company is trying to stop Summit Entertainment from releasing “Letters to Juliet” starring Amanda Seyfried next month.

As first reported by the Hollywood Reporter Wednesday, EVP Enterprises is seeking to get a New York District Court to enjoin the May 14 premiere of the film, claiming that it obtained the exclusive rights to one of the movie’s essential plot elements. 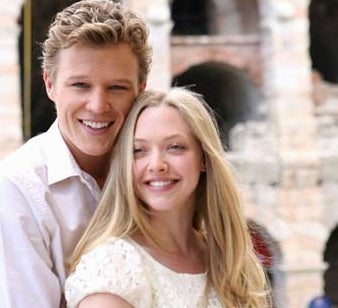 In the film, Seyfried’s character travels to Verona, Italy, where she joins a group of women who respond to the lovelorn letters routinely left at the gravesite of “Romeo and Juliet’s” Juliet Capulet.

EVP’s suit claims it has an exclusive deal with ErgoArts, which owns the story rights to that real-life group, Club di Giulietta, and that the pair have been working on their own film project, “Dear Juliet,” since 2000.

In January, Summit filed its own suit against ErgoArts and founder Ellen Rigas (daughter of Adelphia Comminications founder John Rigas), seeking to have the court declare that “Letters to Juliet” didn’t violate anyone else’s rights.

A decision on the injunction request is expected soon.

“Summit believes the counterclaims stated by Ms. Rigas and her affiliated entities are baseless, which is why Summit initiated the action by seeking declaratory relief.  Nonetheless, Summit has been in discussion with Ms. Rigas and her representatives for some time in an attempt to reach a mutually satisfactory resolution outside of court. Summit remains confident that should this matter proceed further in the courts Summit will be completely vindicated and is prepared to file a motion for summary judgment to that end.  Plans to release the picture remain unchanged.”