Longtime senior correspondent Rick Leventhal is leaving Fox News at the end of the month. The announcement of his departure came Thursday, two days after it was reported that his wife, Kelly Dodd, will not return to Bravo’s “Real Housewives of Orange County” next season.

Leventhal has been with Fox News for 24 years. He and Dodd wed in October 2020.

“Rick Leventhal’s work as a senior correspondent for Fox News Channel has been remarkable,” said a spokesperson for the network Thursday. “From being one of the first reporters at the scene on 9/11, to covering the Iraq War, the War on Terror in Afghanistan, decades of major hurricanes, the death of Osama bin Laden, the Sandy Hook massacre, the Boston Marathon bombing, and a prisoner manhunt at Dannemora, he delivered vivid and powerful journalism that became a signature part of the network’s history.” 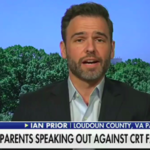 The statement went on, “When Rick came to us and asked to cease reporting breaking news nationally and remain in Los Angeles where we relocated him at his request in 2020, we understood and respected his decision to spend more time with his wife building a new life in California. We wish him much luck and happiness in all of his future endeavors and thank him for his incredible contributions to Fox News Media over the last 24 years.”

On an Instagram Story Monday, Dodd revealed she and Leventhal had both contracted Lyme disease. The next day, People reported she was among the O.C. “Housewives” castmates who won’t return next season.

“The last five years have been an amazing experience. The next five years will be even better. I am so grateful for all the love and support and so excited about the future,” she tweeted Wednesday.