“Leverage” returned on Friday in the form of the eight-episode revival, “Leverage: Redemption,” on the streaming service IMDb TV. But Timothy Hutton, whose character Nate Ford served as the center of the original TNT series, does not appear on screen.

“Leverage,” which ran for five seasons on TNT between 2008 and 2012, starred Hutton as a former insurance investigator who becomes the leader of the Robin Hood-esque gang of criminals who steal from the corrupt and powerful to avenge their victims. The original series ended with Nate (Hutton) and his new fiancée Sophie (Gina Bellman) walking away from the criminal life for good, handing the keys to their organization over to the rest of the crew.

The decision to exclude Hutton from the revival came after the Oscar-winning actor was accused of rape last year by former child actress Sera Johnston. Johnston told Buzzfeed that Hutton and a friend raped her at their hotel in 1983, when she was 14 years old. Hutton denied the allegations at the time, calling them a “failed extortion attempt based on something that never happened.” 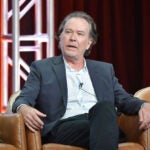 Instead, Bellman and the rest of the returning cast — Aldis Hodge, Christian Kane and Beth Riesgraf — are joined by Noah Wyle for the revival.

“Redemption” reveals the fate of Hutton’s character at the top of the first episode, with the characters reconvening at Nate’s grave to mourn their former leader on the anniversary of his death. The rest of the episode sees a still-grieving Sophie return to the crew for a job targeting an opioid kingpin. Wyle’s character, Harry Wilson, joins the crew as a corporate lawyer looking to make up for a career working on behalf of bad people, along with computer geek Breanna (played by Aleyse Shannon).