Apple TV+ has landed the rights to a feature documentary film about seven-time Formula One World Champion Lewis Hamilton, the streamer announced Wednesday.

The untitled documentary on Hamilton will be directed by Matt Kay and focus on the racer’s life and career. It will feature access to Hamilton and his team on and off the track, as well as a series of guest interviews.

The film will also discuss how Hamilton, the only Black driver in the Formula One series, embraced what made him different from his peers to rise to the top of the sport and influence positive change for future drivers. 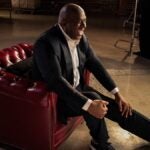 Also Read:
Magic Johnson Would Prefer You Didn’t Compare His Apple Docuseries to ‘The Last Dance’

The British racer shares the record for World Drivers’ Championship titles with Michael Schumacher for the most wins, pole positions and podium finishes (182). Hamilton drove for McLaren between 2007-2012. He also was knighted in 2021.

Apple TV+ also has its documentary “They Call Me Magic” about NBA legend Earvin “Magic” Johnson premiering April 22, as well as another documentary about Sidney Poitier as executive produced by Oprah Winfrey.