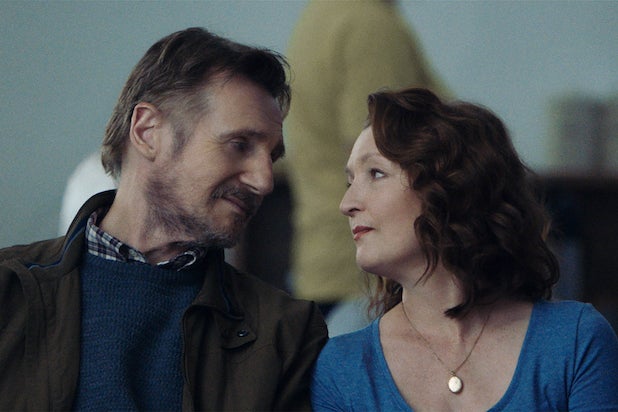 Liam Neeson and Lesley Manville in their new film “Ordinary Love” play a couple who spend time shopping in the supermarket, going on power walks or even waiting for the other to return from the bathroom. The only thing unusual about the setting is that Manville’s character has breast cancer.

“Ordinary Love,” which opened Friday in limited release stateside, is a love story that grapples with how two people try to maintain their normal lives even as they cope with a breast cancer diagnosis and looming chemotherapy. And in speaking with TheWrap, Manville and Neeson were struck by the simplicity of the story and how it played up the “small things” in life even as they go through a giant change.

“The challenge is how can you make scenes going to the supermarket interesting? How do you do scenes of just walking through the corridors of a hospital or driving the car on the way to the hospital or coming home from it,” Manville told TheWrap. “Life is about those small things. You must have a very rarefied existence for those small things to not be a part of your everyday life.”

“I love those little scenes that Lesley hinted about. Going to the grocery store. Waiting with her doctor while I go for a pee, just waiting there. You don’t see that in movies,” Neeson added. “You can read that in the script, ‘She waits for her husband to come out of the bathroom,’ and you think, well that’s nothing. But when you see it on film, it’s actually invested with extraordinary minutiae of life, how important it actually is that perhaps this could be taken away at any moment if this cancer develops. I love those little scenes, almost throw away scenes.”

Lisa Barros D’Sa and Glenn Leyburn directed “Ordinary Love” from a script by playwright Owen McCafferty based on his own personal experience. It shows Manville’s character suffering through chemo but focuses more heavily on the surrounding, quiet moments and the loving, positive relationship Manville and Neeson’s couple have formed over the years.

Neeson and Manville had never met the other before working together on the film, but they had each admired the other’s work on both stage and screen and found their connection effortless.

“It was wonderful working with Liam. We had an ease and a safety,” Manville said. “You couldn’t really have predicted that. You can’t buy that. It’s either there or it isn’t.”

“We didn’t rehearse, but we talked around about it and the circumstances of it, and I just knew we clicked, certainly as human beings and certainly as actors. There were no egos involved,” Neeson said. “There was a lot of life experience in our acting experience, and it just breathes just to do it. No pushing, no effort, just breathe. Say the beautiful lines that Owen McCafferty had written for us. Not get in the way of the script.”

About the film, which opened in the UK late last year, Manville said she’s been moved by how survivors of breast cancer have found their performances to be honest and uplifting. She said she committed to portraying the reality of enduring chemotherapy without glamorizing it in any way.

“A lot of people who have went through it said they found the film uplifting, accurate, positive, they’ve taken great solace from the film that it hasn’t sugar coated the situation at all,” Manville said. “You’ve got to go there with it all, because imagine if I had done that scene and not be willing to go the distance with the effects of chemo and cancer, it would be dreadful. But the women who have seen it, they’ve kind of taken some comfort from seeing a horrible part of their lives represented on screen with a couple who are so positive and into each other as well.”

“Ordinary Love” is in theaters now.