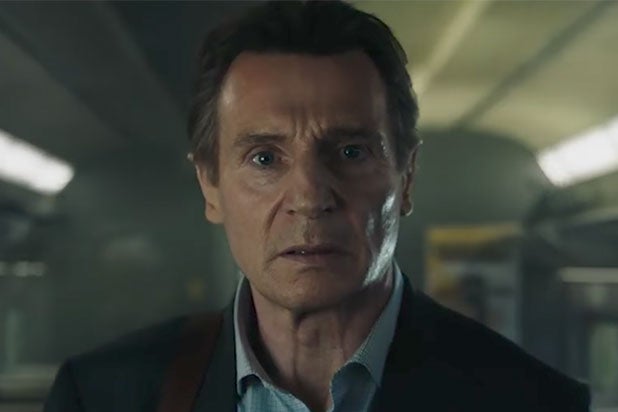 Liam Neeson is back to using his “particular set of skills” — this time, the actor takes a dangerous train ride in the first trailer for “The Commuter.”

The trailer follows Michael Woolrich who has taken the same train morning train for 10 years. This time, however, he meets a woman (Vera Farmiga) who puts him up to a deadly game.

“You have until the next stop to decide — what kind of person are you?” Farmiga’s character asks Woolrich, before telling him he needs to find the one person who doesn’t belong on this train. Oh, and there is a ton of cash money lying around in the bathroom should he decide to take on the mission.

As the trailer continues, it seems that Woolrich was set up, and it becomes clear that this is not his typical morning commute to work.

The trailer for the Lionsgate film was released just a few hours after the Irish actor told the Associated Press that he’s done with action thrillers, although he’s still getting high-cash offers to do “Taken” style movies.

“The thrillers, that was all a pure accident,” said Neeson. “They’re still throwing serious money at me to do that stuff. I’m like, ‘Guy’s I’m sixty-f—ing-five.’ Audiences are eventually going to go, ‘Come on.'”

Besides “The Commuter,” Neeson still has one action thriller lined up — “Hard Powder,” in which he plays a snowplow driver who has to face off against drug dealers.

“The Commuter” is directed by Jaume Collet-Serra, who also directed Neeson in “Unknown,” ″Non-Stop” and “Run All Night.”

"The Pelican Brief" (1993) - The oldest film on this list, Washington teamed up with a red hot Julia Roberts to bring in $101 million dollars in the U.S. and $195 million worldwide.
View In Gallery
x
Looks like you're enjoying reading