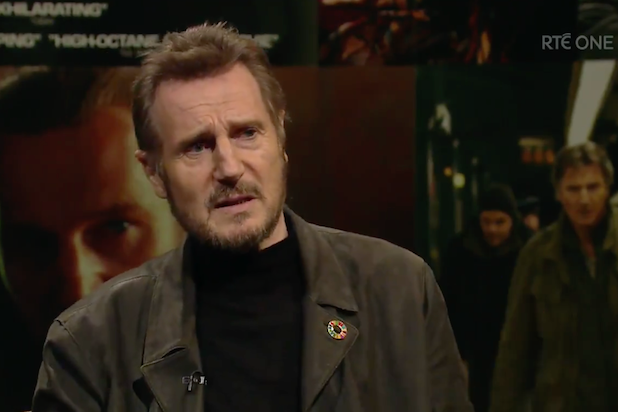 “The Commuter” star Liam Neeson says the #MeToo movement has become “a bit of a witch hunt” and defended Garrison Keillor and Dustin Hoffman, two prominent men who have been accused of inappropriate touching.

Appearing on “The Late Late Show” in his native Ireland, Neeson told host Ryan Tubridy that the reactions against some men accused of misconduct have been too severe.

“There is a bit of a witch hunt happening,” Neeson said. “There’s some people, famous people, being suddenly accused of touching some girl’s knee or something and suddenly they’re being dropped from their program or something.”

He cited as an example former “Prairie Home Companion” host Garrison Keillor, who was scrubbed from the program and fired by Minnesota Public Radio after he was accused of touching a woman inappropriately. In Neeson’s understanding, Keillor touched the women’s bare back while consoling her.

“He immediately took his hand away and apologized,” and despite assurances from the woman that he needn’t worry, her lawyer soon contacted his employers, Neeson said. (Keillor has told the Associated Press he was fired over “a story that I think is more interesting and more complicated than the version MPR heard.”)

Neeson shook his head at “the Harvey Weinstein stuff.” When Turbridy named Spacey, Neeson merely replied, “Kevin too,” not elaborating.

But when Turbridy mentioned Dustin Hoffman, Neeson said he was “on the fence.” He then offered a somewhat confusing explanation for the accusations against Hoffman.

Kathryn Rossetter, who co-starred with Hoffman in the 1984 Broadway revival of “Death of a Salesman” and 1985 TV movie of the play, said Hoffman repeatedly touched her inappropriately, cupped her breasts as they posed for pictures, and once pulled up her costume to expose her breasts to the crew.

“When you’re doing a play and you’re with your family — other actors, technicians — you do silly things,” Neeson said. “You do silly things and it becomes kind of superstitious: If you don’t do it every night you think it’s going to jinx the show. I think Dustin Hoffman was… uh… uh. I’m not saying I’ve done similar things like what he did, you know apparently he touched a girl’s breast and stuff. It’s childhood stuff.”

Still, Neeson said there are positive aspects of the reckoning about sexual misconduct.

“There is a movement happening… it’s healthy and it’s across every industry.” He added that he’s a UNICEF ambassador, and said that the information he’s received about female laborers is “chilling.”

Neeson’s latest film, “The Commuter,” opened Friday. The following people will probably not be buying tickets::

Hi here's Liam Neeson saying it's fine to grab a woman's breasts if it's part of a pre-show superstition. https://t.co/NdfiFnDNZD

Dear Liam Neeson, until you've been in the position of feeling completely vulnerable over the fear of being groped, shut up. What a disappointed he turned out to be. ????????‍♀️#MeToo #LateLateShow

Disappointed by Liam Neeson’s comments. Reinforcing the idea that inappropriately touching women was the norm and therefore ok. The reference to a ‘witch hunt’ also irked me. #LateLateShow

Liam Neeson fans everywhere as he opens up on the #MeToo campaign. #LateLateShow pic.twitter.com/tzSJ1H4ZYH