“MANAA hopes to show that showering praise on a movie such as ‘Licorice Pizza’ is condoning anti-Asian racism and gives a message that racism in movies is ok as long as Asians are the victims. Unfortunately, these attitudes translate into and perpetuate the anti-Asian hatred we see in the world around us,” a MANAA spokesperson told TheWrap Monday.

In one scene early in the film, restaurant owner Jerry Frick (John Michael Higgins) discusses a restaurant ad in a local newspaper and asks his wife, Mioko (Yumi Mizui) what she thinks of the ad while addressing her with a mock accent. In a later scene, when the main characters Gary and Alana (Cooper Hoffman and Alana Haim) discuss posting ads for their waterbed company at the restaurant, Frick uses the same accent again to his “new wife.”

“The cringeworthy scenes in ‘Licorice Pizza,’ which takes place in 1973, do not advance the plot in any way and are included simply for cheap laughs, reinforcing the notion that Asian-Americans are ‘less than’ and perpetual foreigners,” MANAA has said.

Criticism of the two scenes with Frick has been shared by Asian filmmakers and film critics, leading to The New York Times’ Kyle Buchanan to ask Anderson about the scene in an interview.

“I think it would be a mistake to tell a period film through the eyes of 2021. You can’t have a crystal ball, you have to be honest to that time. Not that it wouldn’t happen right now, by the way,” Anderson told The Times. “My mother-in-law’s Japanese and my father-in-law is white, so seeing people speak English to her with a Japanese accent is something that happens all the time. I don’t think they even know they’re doing it.” 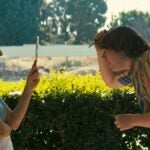 MANAA noted Anderson’s response in an earlier statement, with the organization’s founding president Guy Aoki questioning whether Anderson would have felt comfortable having Frick use a mock accent if his wife were Black.

“Would he even have dared to include a similar stereotypical scene that insulted African-Americans and encouraged the audience to laugh?  Absolutely not, because the blowback would have been swift, harsh, fierce, and his film would have been shut down,” Aoki previously said. “But because Asian Americans serve as the punching bag, Anderson (perhaps subconsciously, hopefully not consciously) figured no one would care, and judging by the acclaim his movie’s getting, he may be right.”

“Licorice Pizza” has been heavily favored to earn a Best Picture nomination at the Oscars next year, having won Best Film and Best Director Oscars from the National Board of Review. The film has also been performing well in limited release at arthouse theaters, earning the highest per theater average of any film this year.