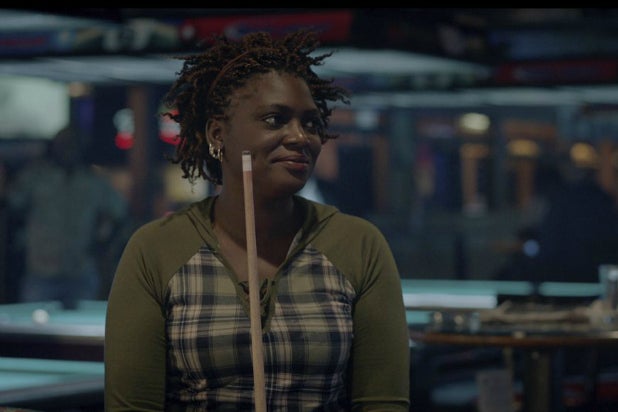 If, per Thoreau, the mass of men lead lives of quiet desperation, what do the mass of women lead? To watch single mom Regina (Regina Williams), the central figure in Antonio Méndez Esparza’s dramatic feature “Life and Nothing More,” as she struggles to raise a three-year-old daughter and 14-year-old son, the notion of quiet desperation might seem like a luxury. Contemplative brooding doesn’t keep you on your feet at a minimum-wage diner job, or put food on the table, or keep a teenager from worrisome choices with life-altering consequences.

It’s the steady drip of sustaining oneself and one’s loved ones, in a world in which your problems are invisible to nearly everyone else, that undergirds Esparza’s attentive, unvarnished work of modern neorealism, his second such effort in this realm after his 2012 debut about Mexican migrant workers, “Aquí y Allá.”

As with that film, Esparza uses non-professional actors — which in the case of Tallahassee, Florida native Williams amounts to something of a powerfully raw find — and a narrative style built on documentary-like observances from a mostly fixed camera. The result is an effortless directness, and a confidence in the appeal of sentiment-free storytelling, that yields a humming humanity about some of society’s least seen and most oppressed. And as our persistent have/have-not divide continues, with little sign that Black America’s working class is on the minds of the majority of those in power, movies like “Life and Nothing More” take on a certain urgency.

Also Read: Inside the 2018 Spirit Awards: 9 Things You Didn't See on TV

Regina’s first words say it all, heard on a bus sitting next to her son Andrew (Andrew Bleechington) on their way to court: “I’m f—ing done.” She’s not, of course, but with jail time hanging over Andrew’s head for breaking into cars and not attending scheduled counseling sessions, the last thing she needs is for her stoic, on-the-edge son to follow in the footsteps of his incarcerated father. At school, Andrew silently sits while a teacher drills the Constitution’s “We the People” ideals, while in the back of our minds is the modern reality of this country’s corrosive inequality when laws are applied to young, economically disadvantaged African Americans.

Regina’s frustrations are marked not only by disciplinary outbursts at home, but also in small-talk venting about men at her waitressing job when Robert (Robert Williams, unrelated to his co-star), a burly, inquisitive customer, shows interest in her. His sweet-talking ways eventually wear down her mildly flirtatious, crossed-arms defensiveness, and they begin a relationship, which doesn’t sit as well with Andrew, whose suspicious attitude toward Robert starts to rankle him. For all the ways Regina and her son care about and need each other, their expressions of protectiveness — hers when Andrew is at his most vulnerable, and Andrew’s when his mother has found affection and help in a new relationship — can seem like a haranguing negativity, tragically out of sync with the deeper complexity of the situation.

Though many scenes play out in long, unobtrusive, and clearly improvised takes that suggest the camera just happened to catch life as it’s happening — as if you were eavesdropping from a nearby vantage point, not always able to see facial expressions or grasp a conversation’s particulars before the movie cuts away — that doesn’t mean there isn’t an authorial nimbleness regarding the power certain images evoke. When, later in the film, an increasingly vexed Andrew starts walking through a well-appointed neighborhood alone, Esparza is clearly nudging us toward thoughts of Trayvon Martin.

What eventually comes of Andrew’s mysterious sojourn is, again, hardly Thoreau-like. It’s thankfully not fatal but still fateful — a confrontation started by a fearful young white couple that sends Andrew right back into the arms of the law — but it’s the kind of third-act indignity that nearly tips “Life and Nothing More” into conveniently dramatic miserableism.

Also Read: Charlize Theron Says 'Racism' May Drive Her and Her Black Children Out of the Country

And yet Williams’ Independent Spirit Award-nominated performance is what saves it, depicting a woman whose checklist of pressures doesn’t allow for anything but a tireless, focused doggedness regarding her family’s survival, especially when the reach of an all too ready-to-pounce, discriminatory justice system is involved.

Movies like Esparza’s aren’t designed to loom large, making the ordinary feel extraordinary, or pushing us toward readily accessible outrage. “Life and Nothing More” wants to be a window where no part is unsmudged or unnecessarily ornamented, and the view is remarkable for showing what you rarely see in two movie hours: a respect for the naturally compelling immediacy of the everyday struggle.