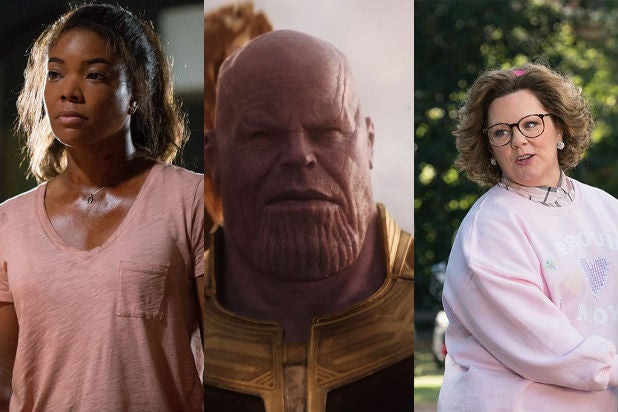 The second weekend of May has become a difficult spot to earn a solid opening weekend, as every film that enters the theaters at that time does so in the shadow of an unstoppable Marvel movie. That’s the situation faced by Warner Bros/New Line’s “Life of the Party” and Universal’s “Breaking In” against “Avengers: Infinity War” this weekend… mostly.

“Infinity War” is expected to easily hold on to the No. 1 spot for one more weekend before giving it up to “Deadpool 2” next week. So far, the film’s holdover performance has been consistent with other May Marvel releases, but on a larger monetary scale. After scoring a record $257 million opening weekend, “Avengers” made $114.7 million in its second weekend for a 55 percent drop. Last year’s May Marvel release, “Guardians of the Galaxy Vol. 2,” had the same drop, and most recent MCU May films have had drop-offs in the 55-60 percent range.

The third weekend drop-off for those past films averaged at around 50 percent, so analysts are expecting “Infinity War” to make approximately $55-60 million this weekend. That’s well above the tracking for this weekend’s new releases, with “Life of the Party” expected to have a $20 million start and “Breaking In” looking at $15 million.

But going up against a third-weekend Marvel film instead of a second-weekend one might allow these films to perform above expectations — if they have the goods. Past releases that got swallowed up by Marvel, like “Snatched” and “King Arthur: Legend of the Sword” did last year, were dead-on-arrival after getting panned by critics, leading most moviegoers to skip them in favor of a superhero fix. But one film that was able to thrive despite Marvel, WB’s 2013 adaptation of “The Great Gatsby,” which opened against “Iron Man 3,” rode strong word-of-mouth to a respectable $353 million global run.

“Life of the Party” won’t make that much, but it is looking optimistically for an opening in the low-$20 million range, a solid result given the film’s low-30s production budget. “Life of the Party” finds itself in a similar position to STX’s “I Feel Pretty,” a film that had a $32 million budget and opened to $16 million last month with a current domestic total of $39 million.

Recent adult comedies like “Game Night” — another WB/New Line film — and STX’s “Bad Moms Christmas” found success, but “Life of the Party” faces an uphill box office battle. The film is Melissa McCarthy’s first lead performance in two years, and numbers for comedies she’s starred in have trended generally downward due to bad word of mouth.

McCarthy’s headlining career peaked five years ago with Fox’s “The Heat,” a summer action comedy film that opened to $39 million and grossed $159.5 million domestically. She found similar success in 2015 with “Spy,” a send-up of the spy thriller genre that performed respectably with $110 million domestically and $235 million worldwide against a $65 million budget.

But when she’s starred in cheaper, lower-budget comedies that are closer to the vein of “Life of the Party,” results haven’t been as good. “Tammy” and “The Boss” failed to move the need substantially, with “The Boss” making just $78.8 million worldwide against a $29 million budget in 2016, down from the $100 million grossed worldwide by “Tammy” two years prior.

“The Boss,” which opened April 2016, was hampered by poor word-of-mouth upon release and was lost in the shuffle when Disney’s “Jungle Book” remake opened the following weekend. To post a solid result as comedy counter-programming in the face of this month’s big blockbusters, “Life of the Party” will need to avoid a similar fate with audiences or else fade away next weekend when “Deadpool 2” hits theaters with both superhero movie thrills and naughty laughs.

“Life of the Party” stars McCarthy as a recently divorced mother who decides to go back to college to finish her degree…at the same school that her daughter (Molly Gordon) is attending. The film is rated PG-13 to be more friendly to mother-daughter audiences, whom WB is hoping will turn out on Mother’s Day weekend. McCarthy co-wrote the film with Ben Falcone, who is also director.

“Breaking In,” meanwhile, may have a bigger upside this weekend thanks to the cult following of the thriller’s lead star Gabrielle Union and its producer, Will Packer. The film stars Union as a single mother who travels to her recently deceased father’s Malibu mansion to settle his estate, only to find herself in a ferocious battle to save her children from four criminals who invade the house and kidnap them, demanding she hand over the contents of her father’s safe.

This is Packer’s first film since last summer’s under-the-radar hit “Girls Trip,” and his first thriller since 2014’s “No Good Deed,” which grossed $54.3 million against a $13.5 million budget. “Breaking In” cost roughly half that amount to make, and is expected to open in the mid-teens. It could possibly take the No. 2 spot from “Life of the Party” if Packer and Union’s fans spread the word. With a few exceptions like “Girls Trip,” Packer films haven’t been critical hits, but like Tyler Perry, Packer has built a devoted audience and knows how to cater to them.

Union co-produced the film with Packer, with James McTeigue (“V For Vendetta”) directing from a screenplay by Ryan Engle.