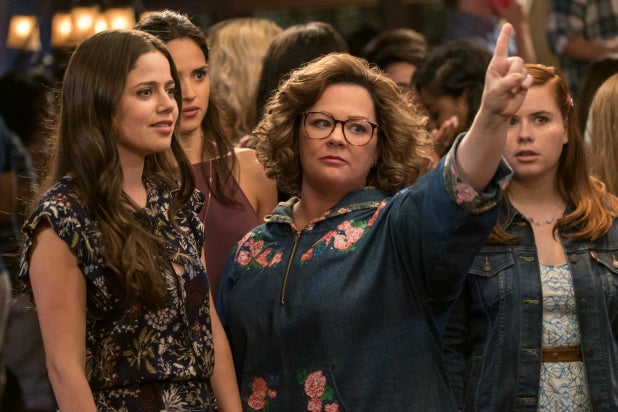 Melissa McCarthy may be a crown jewel in today’s comedy realm, but she’s not doing her audacious shine any favors with “Life of the Party,” a slapdash back-to-college vehicle that leaves her formidable gifts floundering.

It’s become all too apparent that of the two directors who have worked with McCarthy the most since her “Bridesmaids” breakthrough — that film’s director, Paul Feig (“The Heat,” “Spy,” “Ghostbusters”) and McCarthy’s husband Ben Falcone (“Tammy,” “The Boss,” and now “Life of the Party”) — it’s Feig who recognizes her strengths, who understands how to let her elevate material and bounce off the people and situations around her. (That usually starts with a halfway decent script.) Falcone, on the other hand, clearly adores his wife, but thinks just turning on the camera is all his genius, wind-up spouse needs.

What that means for “Life of the Party” is, it doesn’t matter that the McCarthy at the beginning of the movie and the McCarthy at the end feel like two of at least seven different versions of housewife-turned-student Deanna Myles in this undercooked story. Whatever “Life of the Party” needs its star to be, it gives us — frumpy, hot, weird, normal, kind, mean, humiliated, heroic, limber, uncoordinated, sexy, unsexy — in the desperate hope that you’ll latch on to some nugget of McCarthy-patented brazenness and you’ll laugh, as if story and cohesion meant nothing.

Watch Video: Melissa McCarthy Heads Back to College in 'Life of the Party' Trailer

To reference a college staple, this is McCarthy as everything punch, and as deliriously on as she can be. But the lingering effect is, “What exactly was that?” And not in a good way.

When we meet Deanna, she’s a half-permed, half-blow-dried, bespectacled, appliqué-sweatered mom holding back tears at saying goodbye to her daughter Maddie (Molly Gordon, TNT’s “Animal Kingdom”) as she and impatient hubby Dan (Matt Walsh) drop their kid off at college. Deanna’s proud-ma vibe is quickly extinguished, however, by Dan’s asking for a divorce (he’s been having an affair) mere seconds after the car doors have closed.

After commiserating with her parents (Stephen Root and Jacki Weaver) and her best friend (Maya Rudolph), Deanna decides to finish what she cut short when she first got pregnant 18 years prior: getting her college degree at the same university where her daughter is now. Maddie is naturally sympathetic to her mom’s second-chance spirit, yet also mildly horrified, especially when, upon re-enrolling, Deanna gloms on to her sorority pals — a sweet oddball (Jessie Ennis, “Better Call Saul”), a shy beauty (Adria Arjona, “Emerald City”), and a twentysomething (Gillian Jacobs) returning to school after being in a coma for eight years — with well-intentioned, if awkwardly intrusive maternal zest.

Also Read: Can 'Life of the Party' and 'Breaking In' Carve Out Box Office Success During 'Avengers' Reign?

This would seem to be a suitably layered, conflict-ready dynamic for a mother and daughter, but it’s hardly explored as such, nor is any sense of what real college life is like; Deanna is presented as a responsible tornado of aw-shucks positivity instantly accepted by all the youngsters, save a pair of snarling mean girls (Debby Ryan, Yani Simone) whose status as foils for comeuppance is woefully transparent, and better suited to disposable high-school sitcoms than a movie supposedly about higher education.

The ins and outs of learning isn’t this movie’s focus, however: social flowering is, so we get the requisite makeover, the alcohol-fueled losing of inhibitions, the sorority initiation (McCarthy’s response to getting paddled is her funniest bit), and even a hook-up with a handsome frat boy (Luke Benward) that turns into a steady fling. The fast friendships and acceptance have the strange effect of neutering a late attempt to wring comedic tension out of Deanna’s ex quickly getting re-hitched to his snarling, well-heeled squeeze (Julie Bowen).

Then again, much of “Life of the Party,” as cobbled-together by screenwriters Falcone and McCarthy, is a series of scenes intended to breed studio-comedy familiarity rather than honest character development: there’s the ’80s-themed dance party, the scarfed-down chocolate discovered (oops!) to contain marijuana, a classic McCarthy physical meltdown nervously delivering an oral midterm, and a money-raising final Greek blowout with a surprise-not-surprise appearance by a major recording star, message-y anthem at the ready.

Sure, comedy pros like Rudolph, Walsh, Bowen and Jacobs do their best to grab yuks in McCarthy’s towering shadow. But “Life of the Party,” and Falcone’s barely-there, beat-erratic direction, already makes it seem as if we’re in a greatest-hits stage of McCarthy’s career, when the reality is that a more comically nuanced, thoughtfully-structured, detail-rich movie about a middle-aged mom turning a gut-punch into a new lease on life could have been a killer showcase for McCarthy the soulfully hilarious actor.

Remember how she made every moment in “Bridesmaids” into a wild and richly dimensional portrait of proud outsider-dom? But also how she turned “Spy” into an unexpectedly shaded story of my-time-is-now, leading-lady heroism? McCarthy is the life of any party she stars in, but something’s wrong when she’s working overtime, with the seams showing, to hide how little else there is to enjoy.