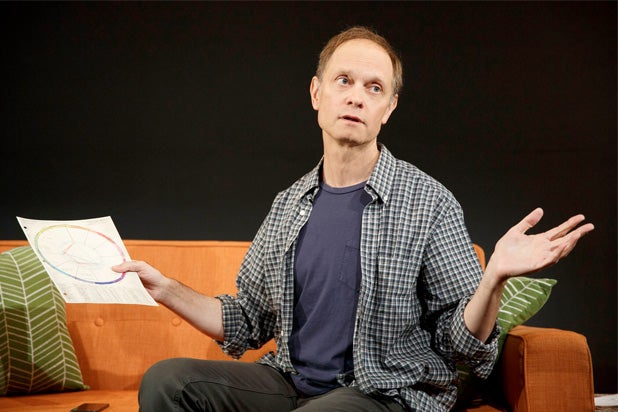 In Christopher Isherwood’s 1964 novel, “A Single Man,” a homosexual dies unexpectedly and his body is immediately referred to as something akin to the morning’s garbage. In the 2009 film version directed by Tom Ford, Colin Firth doesn’t turn into garbage. Rather, he becomes the best-dressed corpse ever. David Hyde Pierce doesn’t resemble the contents of a body bag in Adam Bock’s provocative new play, “A Life,” nor is he even very well groomed.

But he is a single gay man, not entirely satisfied with his life; and as in the Isherwood classic, we experience the ferocious rush of life around him when his existence comes to an abrupt end. It’s a remarkable achievement in the theater, and one so peculiar that you probably won’t be able to recall any other quite like it. “A Life” opened Monday at Off Broadway’s Playwrights Horizons.

Pierce’s Nate Martin is hardly one of the theater’s more fascinating characters. In fact, he’s kind of a dud, and the only way in which he surprises us is when he lists by name all his boyfriends, dates, tricks, and live-in partners. What any of these men saw in Nate to make them endure more than a single dinner or an hour in bed isn’t always easy to fathom. On the vaguely positive side, his bookshelf does sport many titles to be found on the college course “Introduction to the 19th-Century Novel.”

Pierce is such an engaging performer that we never ask why he’s talking to us. The play’s first half hour is not so much a monologue but a conversation between his character and an audience of one who never gets a chance to talk.

Nate careens between discussing his love life and his second-class status (his parents gave him a used car when his sister married, as a kind of consolation gift for having to remain single), and Bock’s segues between subjects are ingenious and often very funny as delivered by Pierce.

But Nate’s greatest passion is for astrology. It gives his otherwise mildly disappointing life a kind of grandeur, a unique place in the cosmos.

Anne Kauffman’s direction and her fine use of Laura Jellinek’s set, which achieves more spectacular metamorphoses than a busy caterpillar, succeeds in giving Nate a place in eternity, even if it is only momentary.

He is deeply mourned by family and friends, and given a modicum of respect by strangers who have lives of their own to lead before they, too, face the end. While they’re going about their jobs, they assiduously avoid facing that very end.

The delicate performances of Marinda Anderson, Brad Heberlee, Nedra McClyde, and Lynne McCollough make it clear that when you’re dead, it’s over. Maybe.