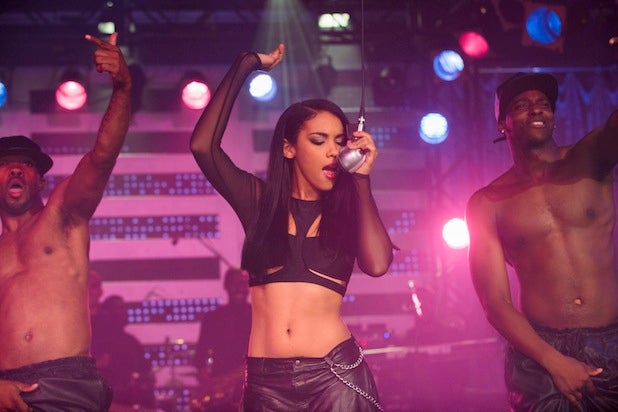 The trending topics included “#AaliyahMovie”; “Missy and Timbaland,” referring to Aaliyah’s longtime producing partners; “RKelly,” her producer and husband by a marriage that was later annulled; and Wendy Williams, the talk show host who joined the project as an executive producer amid controversy, among other terms.

See photos: The Top 40 Best and Worst Actors Playing Musicians Before 'Get On Up'

The huge amount of social activity surrounding the movie is the good news for Lifetime. The bad news is that many of the tweets were harsh. At one point in the evening, “#LifetimeDisrespectsAaliyah” was a trending topic, for example.

The negative fan reviews are just the topper of a controversial journey for the biopic. Not only was Aaliyah’s family opposed to the movie, its first star, Disney Channel actress Zendaya Coleman, dropped out of the project amid controversy over her casting and her own personal issues over the production. That would be followed with further furor from fans when additional castings, particularly the movie’s choice for Aaliyah’s longtime producer Missy Elliott, led to accusations of “Hollywood colorism” and body bias.

Executive produced by Williams, Howard Braunstein and Debra Martin Chase, the two-hour movie is based on Christopher John Farley’s bestselling book “Aaliyah: More Than a Woman.” It charts Aaliyah’s life from the age of 10 when she appeared on “Star Search,” the path to her first album and R. Kelly, her meteoric rise and then to age 22 when she died in a plane crash in 2001.

Here’s a sample of the tweets that filled Twitter timelines while the movie aired:

She's a legend , her movie shoulda been introduced in theaters

The only thing recognizable through out the whole movie is her one outfit in this scene. Smh #aaliyahmovie

Waiting to watch the #AaliyahMovie on Lifetime b/c I'm nosey. But so far, east coast folks are tweeting: pic.twitter.com/ZR0L8UBKMU

"This is supposed to be about Aaliyah's life." Me: #aaliyahmovie pic.twitter.com/qfTE192Rpp

The "we don't have rights to Aaliyah's music" struggle is entirely too real. SMH #AaliyahMovie

I see why Zendaya didn't want to play this role #LifetimeDisrespectsAaliyah these type of roles can ruin a career.

This Aaliyah movie need to dust itself off & try again

I'm about to write a 4 Page Letter to @WendyWilliams about this Aaliyah movie.

This is how you do a biopic @lifetimetv. If the budget is 2 small maybe it's not worth doing #aaliyahmovie pic.twitter.com/s3eg8319OA

I mean this w/ no disrespect intended this is just my personal opinion, but that #AaliyahMovie was just a complete waste of 2hrs