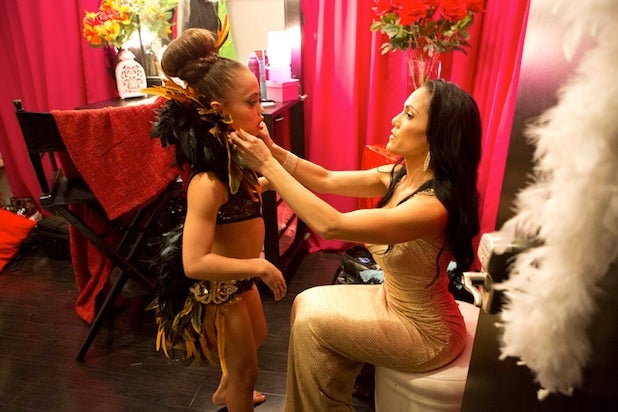 After just one season on Lifetime’s “Dance Moms,” young Asia Ray Monet was the first dancer to be given her own show. “Raising Asia,” which followed the eight-year-old as she adding singing to her list of performance skills, airs its first season finale on Tuesday.

Mom-ager Kristie Ray said that she doesn’t consider “Raising Asia” a “Dance Moms” spinoff. Her daughter was offered her own show at six-years-old when she competed on the first season of “Abbie’s Ultimate Dance Competition.” But, they weren’t sure she was ready then and accepted an offer to get more TV experience under Asia’s belt by appearing on Season 3 of “Dance Moms.” But, that was enough for Asia.

“When you’re on a show like that, you can’t grow as a dancer the way Asia has grown,” Kristie told TheWrap. “Asia trains six days a week. So when you’re filming, that’s cut down to one. Then, there’s the choreography you have to learn for the show. Asia was more interested in training and staying in L.A. than being on the show.”

After one season on their own, Kristie does feel that the show could’ve been better.

“They said they wanted to show Asia’s journey and not do another ‘Dance Moms’ show,” she said. “But when you do that, you give up control. And as you’ve seen, they show a lot of drama.”

TheWrap: What would you have wanted more of on the show?
Kristie Ray: Asia does a lot of stuff that aren’t just for her, for charities, for her fans. There’s a lot of other things. I know time there’s a time crunch. You can’t fit everything in.

Asia, how do you feel you’ve been portrayed on the show?
Asia Ray Monet: I think that the show’s amazing and we’ve gotten such great ratings. It’s doing very well on Lifetime. I think they could’ve showed more of my training with other choreographers. It felt sort of the same, sometimes. And like my mom said, they could have put more of the other shows I’m in, the charity events. And the performances you did see, you see a snippet of them and then it’s over. Maybe, they could have cut back on my mom’s arguing and everybody yelling and the drama stuff, maybe you’d get to see more of my life. It’s not ‘Raising My Family,’ it’s ‘Raising Asia.’

How prepared do you feel going into the big Universal Studios performance?
Asia Ray Monet: Well, I’m really prepared. There’s some little bumps in the road, but everything was really cool. Actually, I don’t think I had any problems with anything. It was awesome.

Kristie, how would you say everyone worked together heading into that final performance?
Kristie Ray: Well you know, there’s a lot of testosterone in the room… Sometimes, I wonder ‘What’s going on here?’ We’ve agreed to disagree, but sometimes now it seems like a contest. It takes such different turn with all the men in the room… It’s very crazy.

Asia, do you have a preference when it comes to your mom and dad handling your career?
Asia Ray Monet: No. I think my dad should let my mom handle the dance moms. I don’t think he wants to.

What’s the feedback you’ve gotten regarding your relationship with your youngest daughter, Bella?
Kristie Ray: Bella, who’s six now, I’ve always wanted to travel with Asia and I. But, Bella likes to be home. So when she didn’t want to travel with us or she got homesick, I thought the best thing we can do for her is bring my mom in, who she’s really close with, or Auntie G, and give her a regular schedule. So, that’s how we’ve always been.

What people are seeing on the show, everyone who knows us said, ‘OK, we know about Kristie and Blu’s relationship.’ What they’re not showing is that we do have a good relationship and I’m there for Bella. But, they’re showing the times where I’m not there for Bella and it seems like there’s detachment. And really, there’s really not… Bella has a very positive, happy life and our family situation is very tight.