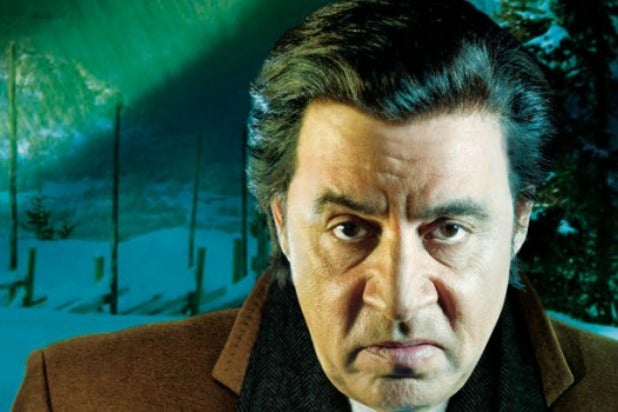 By throwing himself into music, Steven Van Zandt landed in the middle of two pivotal TV shows: HBO’s “The Sopranos,” and Netflix’s first original series, “Lilyhammer.”

The latter series, which begins streaming its second season at midnight PT Friday, helped create Netflix’s  groundbreaking model for shows including “House of Cards” and “Orange Is the New Black.” It’s nothing Van Zandt planned when he joined Bruce Springsteen’s E Street Band four decades ago.

“Just by coincidence I happened to be in the right place at the right time,” said Van Zandt. Besides starring as a mobster who relocates to Norway on “Lilyhammer,” he and also co-writes, executive produces and (of course) supervises the music on the show.

“Isn’t that how life is? You work at one thing, and then life just kind of happens to you.”

Van Zandt didn’t set out to make history either, but he helped: As the head of Artists Against Apartheid in the 1980s, he enlisted performers from Bono to Run-DMC for the song “Sun City,” which raised awareness of the pro-Apartheid regime imprisoning Nelson Mandela. Mandela later reached out for help raising money for a free South Africa.

Nearly one million viewers – one fifth of Norway’s population — tune into each episode of “Lilyhammer.” Though Netflix doesn’t release viewership figures, Van Zandt said more than 2 million Americans watched last season. We talked to him about why he’s so big in Scandinavia, meeting Mandela, and whether the E Street Band could control a President Chris Christie.

TheWrap: Do you think part of the show’s appeal in Norway that your character is such a hot-blooded guy in such a cold climate?
Van Zandt: Yeah, yeah. I absolutely do. I think they’re getting off kind of vicariously through him maneuvering around the bureaucracy and breaking the rules that they are too civilized to break themselves. They’re an extremely civilized, evolved society, very, very concerned with courtesy and being polite. I think they enjoy the fact that somebody’s doing what they feel inside.

Your character solves everything with violence and threats.

Will it all come back to bite him at some point?
In the second season he’s becoming more Norwegian and it’s a slightly different dynamic. We keep the violence pretty moderate because Norway doesn’t like violence at all — it’s the most violent show in the history of Norway. But he feels like there’s a little criminal in everybody, so it’s his job to find it.

[In Season 2] he’s kind of part of he fabric of Norway and we switch up things in the first couple of shows where we have instead of him being the invader, he’s being invaded by these English hooligans which provides a wonderful slant on the whole thing. In addition to that he’s also a father for the first time so we have some fun with that stuff.

Norway takes fatherhood very seriously, parenthood in general very seriously. Women have like 10 months of full pay when they get pregnant and fathers are required to go home for three months with full pay from their job and to be fathers. Which is of course unheard of here.

You’ve been critical of U.S. foreign policy in the past, especially during Apartheid. Do you think we can learn anything from Norway?
They’re completely at another stage of evolution. They have no crime, they have no poverty, health care and education are free for everybody, womb to tomb. So they’re a long way ahead of us. We’ve had two years of discussing health care, which is frankly the wrong conversation. We should be discussing health. … It’s easy to look at Norway and say, ‘Look how much better they are, they have free health care for everybody,’ but they’re able to have free health care for everybody because everybody’s healthy. You can’t just pay for everybody’s healthcare if you have two out of three people obese, which we do.

It’s a big waste of political capital for this president, besides the fact that the opposition isn’t going to let him pass anything, which is really, really bad and really, really wrong. And I would say this whoever is president.

New Jersey Gov. Chris Christie is a huge fan of your music, and Springsteen rewarded him with a phone call after he worked with Obama on Hurricane Sandy last year. If he becomes president, do you think your music might have a little influence over him? Do you think you might be able to sway policy?
[Laughs.] I like Chris a lot personally and it’s a little bit more complicated than usual being in the Republican Party right now. … It’s very hard to see what will be his real policies separate from what he has to say to make the extremists happy. … If they’re going to be in power, then Chris is going to have a tough time, because he’s a reasonable, practical, moderate type of guy and there’s no place for people like that in the Republican Party. I would suggest he wait this one out and wait another eight years and maybe these creeps will go away.

You got to meet Nelson Mandela before he died. What did you talk about?
We talked about the power of music. He was very specific about that and very enthusiastic about the fact that music had the ability to communicate internationally and we were so effective.

I’ve never met anybody like him. I’ve met a lot of people in my life. He was more like a religious figure, like a historic religious figure. He was like meeting John the Baptist. Like meeting the Buddha. Very, very deep, deep inner strength, and warmth and kindness, and an aura like I had never felt with anybody, even close. He was something else, man.