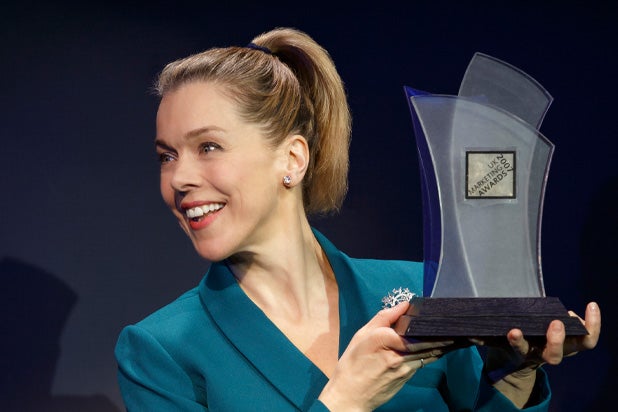 Linda is a marketing executive who, a decade ago, created an award-winning campaign that made Swan beauty products famous “for making women feel good.” Linda was also responsible for spearheading the Confidence Building Workshops that changed “the world one girl at a time. And next: One 50-year-old woman at a time!” she boasts with brimming confidence.

The title character in Penelope Skinner’s play “Linda,” which had its American premiere Tuesday at the Manhattan Theatre Club, keeps referring to this groundbreaking ad campaign throughout the production’s two-and-a-half-hour running time.

Skinner and her character (Janie Dee) never reveal exactly how such marketing would make older women feel good about cellulite and crow’s feet. Linda definitely believes the malarkey of her campaign. She’s in advertising, after all. But what is Skinner’s audience supposed to believe? That anti-aging creams do anything but exploit women’s insecurities?

Linda is shocked, truly shocked, that anyone could disagree with the feminism of her award-winning campaign. She, in fact, clutches her trophy like it’s an Oscar or, at the very least, a Golden Globe.

Linda is the woman who has it all — until she loses it all. Dee gives an uncanny impression in looks and manner of Annette Bening’s go-getter realtor in “American Beauty.” What’s missing is any sense of irony regarding Linda’s success in the phoniest and most exploitative of businesses. A woman who spearheaded Confidence Building Workshops would have begun those confabs by quitting her job at Swan.

Linda talks a lot about ageism and how women begin to feel invisible after a certain age. But ageism cuts the other way, too. It can be an attack by the old on the young. And what a full-frontal assault “Linda” is on the show’s 25-year-old career woman, Amy (Molly Griggs).

Amy not only upends Linda’s career (with a sharp eye on her office with its river view) but also masterminds the online humiliation years ago of Linda’s recluse daughter, Alice (Jennifer Ikeda), who has been reduced to living at home and never taking off a onesie that makes her look like a giant skunk. If that seems like a lot for one character to undertake, you’re right. Amy should have been edited by a dramaturg into a few characters. Worse, Amy’s nothing more than a total prick as written and performed here. (The B-word doesn’t begin to describe her.)

There’s not much arc to Skinner’s characters or Lynne Meadow’s direction. Most of the characters orbit around Linda so that Skinner can make points about 21st-century women. Linda’s husband (Donald Sage Mackay) has an affair with a much younger woman (Meghann Fahy) so that Linda can question her physical attractiveness. Linda’s younger daughter (Molly Ranson) fancies playing Hamlet because men have all the good roles, not only in life but art. Linda’s drive is explained by a tragic backstory about her mother. Linda has sex in a stock room with an office assistant (Maurice Jones) because, well, he’s there and she’s upset.

It’s obvious that playwrights don’t work in offices. In the second act, Linda has a very public melt-down where she rips into Amy’s new ad campaign for Swan. It’s the kind of big theatrical moment that should end with armed guards escorting her out of the building. Skinner, however, gives Linda a few more scenes, including the office sex, before the ax falls. You will sympathize with her boss (John C. Vennema).

Meadow does establish a quiet center with Ikeda’s understated performance. The truly disturbed can sometimes be the most morally responsible. Unfortunately, Ranson emerges as the polar opposite to that half-sister for all the wrong reasons.

Walt Spangler’s lavish set design presents very detailed office and home spaces that revolve around and around on a turntable. Linda’s evaporation into invisibility might benefit from a less literal design. Instead, Meadow keeps that set spinning. On one trip around, we pass what appears to be Linda’s entire universe just to get to her applying cold cream in anguished silence.