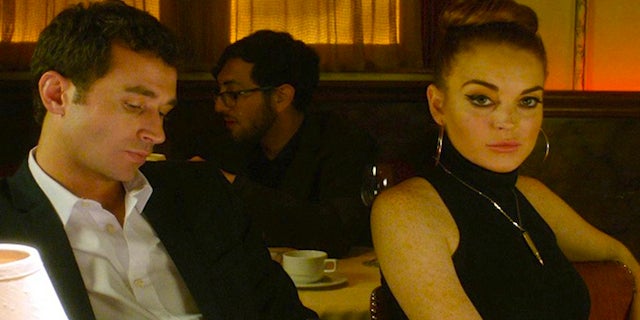 Village Voice critic Stephanie Zacharek is among the few who gave Schrader and Ellis’ retro vision of moral decay in Tinseltown a positive review.

“A movie can be highly imperfect, stilted, or implausible in all sorts of ways — and still be everything you go to the movies for,” Zacharek wrote. “‘The Canyons,’ Paul Schrader‘s contemplation of moral decay in Hollywood, is that kind of picture, in some places so crazy-silly you want to laugh and in others so piercing you can’t turn away.”

For Zacharek, Lohan is one of the reasons she could not turn away, and Variety‘s Scott Foundas offered similar compliments, comparing her performance to Marlon Brando‘s in “Last Tango in Paris.”

“Lohan may not go as deep or as far as Brando, but with her puffy skin, gaudy hoop earrings and thick eye makeup, there’s a little-girl-lost quality to the onetime Disney teen princess that’s very affecting,” Foundas wrote in his praise for the film. “Whenever she’s onscreen, she projects a sense of just barely holding on to that precarious slide area in the shadow of the Hollywood sign.”

So far, Zacharek and Foundas are in the critical minority.

While New York Daily News critic Joe Neumaier gave subtle props to Lohan, who he says is “the main attraction and proves watchable,” he faults Schrader and Ellis for his “boredom.”

The New York Post‘s Lou Lumenick called “The Canyons” the “most boring” movie he’s seen this year and was not impressed by Deen’s cinematic debut outside of pornography.

Indiewire critic Eric Kohn was impressed by the film’s opening credit sequence — populated with images of deteriorating movie theaters — but not much else.

“Paul Schrader‘s miscast, poorly executed and utterly soulless drama is an example of the failing art form it seeks to indict,” Kohn wrote. “Though it has real ideas, Schrader and his team never manage to put them into action.”