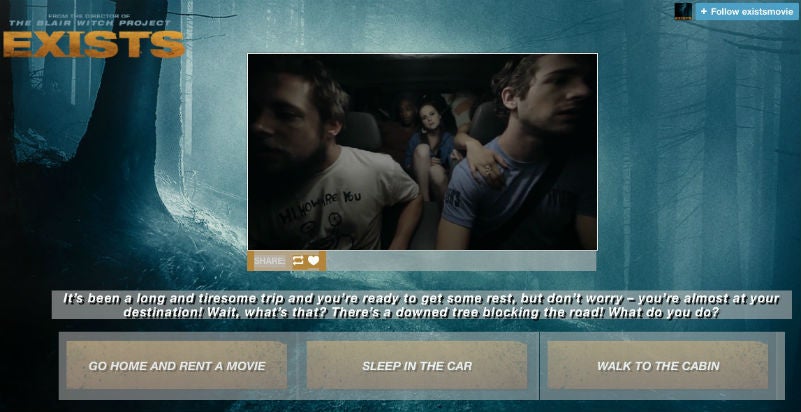 Lionsgate and Digital Media Management have teamed up to create a unique interactive adventure on Tumblr to promote “Exists,” a found-footage creature feature from director Eduardo Sanchez (“The Blair Witch Project”).

The experience allows users to interact with the movie’s characters and determine which direction the story takes by giving them different scenarios and choices at each turn, making it challenging for users to find their way to safety.

Each choice includes a piece of rebloggable content — such as GIFs, videos and images — enabling fans to share their chosen path with their own followers, further promoting the film’s content throughout the platform.

Rather than a traditional EPK movie site, Tumblr was chosen because it’s a highly sharable social platform with a built-in audience that happens to be the target demographic for “Exists.”

The fact that Tumblr is an important part of the promotional campaign for “Exists” is further evidence that studios are investing more money in social/digital PR campaigns.

“We partner with studios and networks to engage consumers in innovative ways on social media. Tumblr continues to be a limitless platform, and we’re constantly discovering new ways to entertain users and tell interesting stories,” said Adam Reynolds, VP at Digital Media Management.

“This site expands further into the first-person found footage world that Eduardo is known for from both ‘The Blair Witch Project’ and ‘Exists.’ By creating an adventure experience on Tumblr where fans select choices that determine their fate, we allow the user to take the reins and truly experience the movie in first person,” said Chela Johnson, VP of marketing at Lionsgate.

“This works in conjunction with some of our other promotional efforts for the film, for example, one specific promotion where we targeted a college-age audience. The in-world website, human-bait.com, was developed to also play up the found footage ‘real life’ aspect of the film and help engage fans,” added Christal Cody, social media manager at Lionsgate.

Lionsgate released “Exists” in select theaters and on VOD on Friday. The Tumblr site can be found here.