This weekend’s soft $29 million opening of “Allegiant” ended Lionsgate Entertainment’s hopes that the series could replace “The Twilight Saga” or “The Hunger Games” franchises.

The third in the series opened to about half of the openings of the two preceding films in the young adult “Divergent” series.

Wall Street noticed. Already down 45 percent from its 12-month high, Lionsgate fell another 3.4 percent early Monday to $21.86 per share. Investors were getting their arms around what nearly everyone in the industry has known for awhile: Lionsgate is left with a limited number of options if it hopes to maintain financial momentum.

The best of them appear to be:

Find a film franchise, and fast

Ironically, the success of the “Hunger Games” and”Twilight” films is complicating the search for a new franchise. The young adult sci-fi genre may be for the time played out, due in large part to the success of those two films. Exhibit A would be “The Divergent Series,” the dystopian future YA series starring Shailene Woodley that now has clearly lost steam and any hopes of matching their success.

Franchises are the holy grail in today’s Hollywood, enabling economies of scale while producing and marketing intellectual property that can provide the base for multiple revenue streams from merchandising, licensing and repackaging for TV or myriad online platforms and theme parks.

None of this is news to Chairman Mark Rachesky, CEO Jon Feltheimer and Vice-Chairman Michael Burns of the Vancouver, Canada-based company, who saw revenues rise to record levels during the “Twilight” and ‘Hunger Games” periods. But it’s not the only way to go, and a look at the studio’s upcoming film suggest a strategy based on a portfolio of hits than one dominated by blockbusters.

Find a partner via merger or acquisition

Potential partners have noticed as well. Coupled with the flop of the pricey sword-and-sandals epic “Gods of Egypt” (which certainly had its own problems), “Allegiant” could complicate Lionsgate’s efforts to acquire the premium movies channel Starz. That bears watching, as Lionsgate indicated in a regulatory filing on Feb. 4 that it had taken a stake in John Malone‘s network and “intends to explore whether there is a potentially mutually beneficial combination of the two companies.” 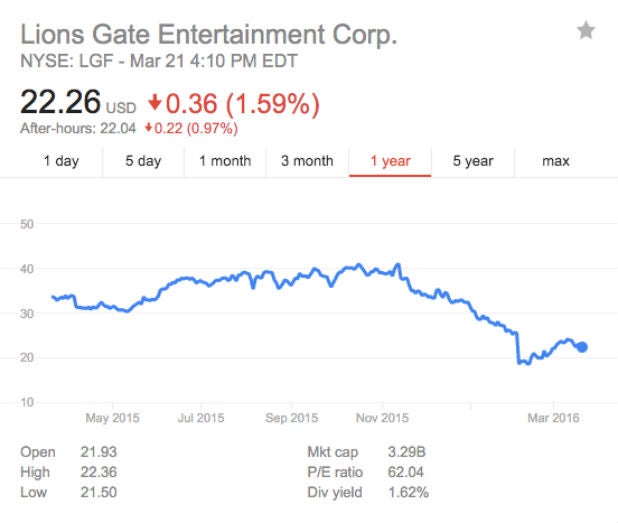 Both the film and TV slates were bolstered by a $375 million slate funding deal with China’s Hunan TV, announced roughly a year ago, and if that bears fruit it’s logical to believe that relationship could expand. China’s Wanda Group, which bought the AMC Theatres chain in 2012, kicked the tires on Lionsgate in 2014 prior to taking a $3.5 billion plunge on Legendary Entertainment earlier this year. Some believe that purchase will renew Alibaba billionaire Jack Ma’s interest in Hollywood, and Lionsgate could be an attractive target.

Hang in, tighten budgets and focus on its booming TV production unit until a film series emerges

This would require a revision of the company’s overall strategy, since Lionsgate generates 75 percent of its revenues from its film unit, according to its most recent financial report. Earnings from its movie unit dropped from $166.9 million to $49.5 million in its most recent quarter.

Lionsgate was the envy of most Hollywood studios just a few years ago. The company had scored big by targeting young women with movies based on established literary projects. The five “Twilight” films, based on the sexy vampire saga, grossed more than $3.34 billion at the global box office, and four “Hunger Games” movies delivered $2.96 billion.

The slate has some strength, but nothing that shouts “franchise!”

The ensemble heist thriller “Now You See Me” was a huge sleeper hit for the company in 2013, taking in $352 million on a $75 million production budget.  The Alex Kurtzman-Roberto Orci-produced sequel arrives in June, and if that one clicks you can bet on at least one more sequel. 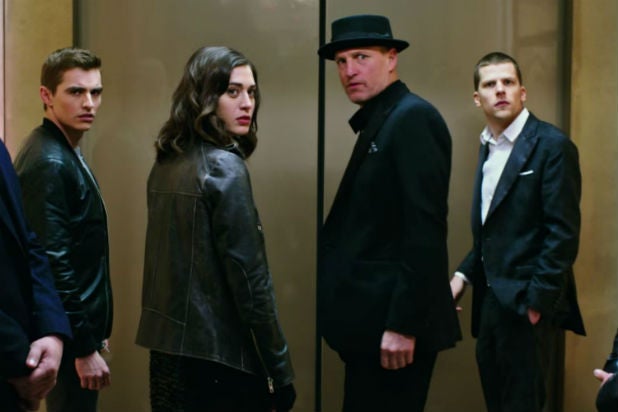 The studio is betting on a nostalgia play by rebooting the cheesy, beloved TV series “Power Rangers,” which hits theaters March 24, 2017. The project features a hot young cast and Elizabeth Banks as their arch nemesis.

There’s also an animated collaboration with Hasbro in”My Little Pony,” a film based on the popular range of plastic dolls. The voice cast includes Emily Blunt, Kristen Chenoweth and six up-and-comers as the lead pack of whimsical horses, and could easily see sequels if it finds success with young females.

“John Wick, Chapter 2” arrives in February 2017 and typifies the low-risk, mid-range return that may be the studio’s course in the near future. Other immediate releases include low-budget comedian like “Natural Born Pranksters” and “Compadres” in April, and a summer popcorn plas with August’s Jason Statham-led “Mechanic: Resurrection.

End of year releases include “Boo! A Madea Halloween” from Tyler Perry, a November adaptation of faith-based “The Shack” which was a monster bestseller and Mark Wahlberg‘s Boston marathon bombing movie “Patriot’s Day” in December.

The good news is that Lionsgate’s TV business could generate more than $1 billion in revenue this year. It’s flagship program, “Orange Is the New Black,” was recently renewed for three seasons by Netflix, and “Nashville” is in its fourth seasons on ABC. Library returns on “Mad Men,” which wound up last summer, should be coming in for some time.

Both the TV and film units are part of several live event or quasi-theme park initiatives. A “Hunger Games” experience national tour is currently in San Francisco. An interactive event show based on the film is available outside London, and the company most well-known properties are part of similar offerings in Dubai and in China, where the company has partnered for the project with the Lai Sun Group.