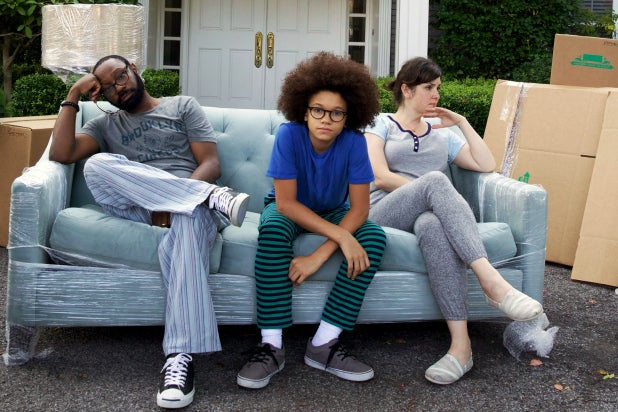 If there’s one tenet this country can agree on, it’s that the United States isn’t even close to being the post-racial hearth we’d like to believe it to be. “Little Boxes” explores racism in America via an upscale family who moves from New York City to the Pacific Northwest. The man is black and the woman is white, and their 11-year-old son seems to get confused only after they’ve relocated and quickly get schooled on small-town life.

Directed by Rob Meyer from a script by Annie Howell (“Claire in Motion”), “Little Boxes” has good intentions if not the subtlest delivery. Coming in at merely 84 minutes, the film had plenty of room to include more shading of its characters — particularly the very Caucasian residents of Rome, Washington, who give the family a largely warm but ignorant welcome.

Gina (Melanie Lynskey), a photographer and art professor, and Mack (Nelsan Ellis, “True Blood”), an author and chef, are hesitant about leaving their cosmopolitan hometown, but she’s accepted a tenure-track position on the opposite coast. Their son, Clark (Armani Jackson, “Grey’s Anatomy”), obviously isn’t thrilled about leaving his friends. But they all perk up when they explore their roomy new home. “There’s, like, bathrooms everywhere,” Gina says. That the movers have yet to make it there is initially a minor inconvenience.

The situation deteriorates quickly. (It has to with that running time.) The kitchen’s range is broken, preventing Mack from working on an article. Trying to reach the movers is a trial that turns combative. One bubbly neighbor reacts to Mack’s introduction by saying, “Wow.” (And then an accurate, “I am so rude.”) Another one who’s working on his lawn while Mack walks down the street asks him, “Can I help you?” (But no self-deprecation follows.)

Even the girls Clark is forced to befriend are obnoxious and quick to stereotype, asking him if he likes rap. (They’re befuddled by his stated preferences of Afro-punk and free jazz.) “We, like, totally needed a black kid,” one girl whispers to the other.

Gina’s new colleagues aren’t much more enlightened. They may not be racist (we’re not given the chance to judge), but they are ill-mannered snobs who spend their workdays getting drunk. Which, as one played by Janeane Garofalo points out, is different than “sloppy.” “This is a very small town,” she berates Gina, who does indeed get sloppy, likely because she’s not used to happy hours that run from 9 to 5.

And the family’s house turns out to be riddled with mold, a rather heavy-handed metaphor for the pervasive suburban poison with which the filmmakers have surrounded them.

It’s not always the native Romans who are annoying, however: Gina in particular becomes irksome, micro-mothering Clark and overreacting to things such as a photo of a female rapper that he’s hung up in his room. Naturally, she doesn’t want her kid to grow up objectifying women. But he’s 11 and trying to fit in with his new friends. Consider that along with their new environment, and surely feminism isn’t a primary concern right now.

Though the racist occurrences keep up at a too-steady pace (including an incident in which Mack says that a neighbor “profiled” their son), the film looks at tension within interracial families as well. It’s shallow as well, but it’s also an interesting perspective on Gina’s position as the only fully white member of the household.

And the film doesn’t earn its all-is-well ending, either. Like its portrayal of these characters, “Little Boxes” is only skin-deep.