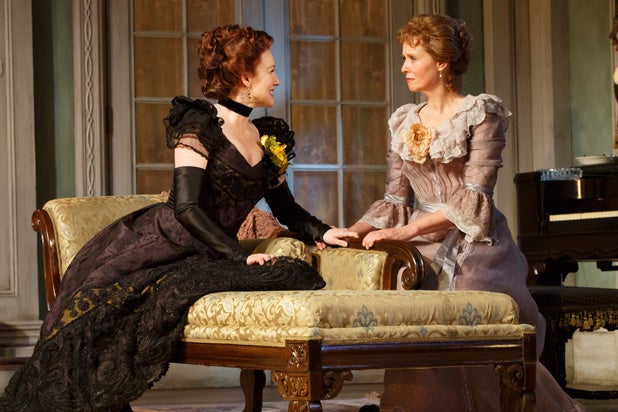 It takes real guts for two actors to alternate roles during the run of a play. Who needs such direct comparisons? Laurence Olivier and John Gielgud famously switched, playing the Bard’s Romeo and Mercutio in a 1935 U.K. production. Now on Broadway, Laura Linney and Cynthia Nixon alternate playing Regina and Birdie in a revival of Lillian Hellman’s “The Little Foxes,” which opened Thursday at MTC’s Samuel  J. Friedman Theatre.

On opening night, Linney played Regina and Nixon played Birdie, and they are excellent in those respective roles. Less wonderful is Nixon’s Regina and Linney’s Birdie.

It would be a real event if this Daniel Sullivan-directed staging offered two different, revelatory interpretations. The problem is, “The Little Foxes” is no “Romeo and Juliet,” not by a long shot, and one viewing every other decade of the Hellman play is about all it will bear. Seeing it twice in a week or even a month is not an event; it’s kind of a chore, especially when the non-opening-night cast is so much weaker.

While an effective melodrama, “The Little Foxes” is no tragedy, and it completely lacks subtext for the actors to perform. Ivo van Hove discovered this when he staged a very unsuccessful “Foxes” a few seasons ago at Off Broadway’s New York Theatre Workshop.

Melodrama is all about bluntness and big gestures. And going for the subtext when there is none merely exposes the mechanics of the plot. At some point in “Foxes,” each of the major characters tells us point blank why his or her life is a mess. Birdie is stuck in a loveless marriage because her husband, Oscar (Darren Goldstein), married her to get to the family cotton plantation. Regina can’t love and is mercenary because her father left all his money to her brothers, Oscar and Ben (Michael McKean). And Regina’s husband, Horace (Richard Thomas), hates her because she threw him out of bed long ago.

When these two actors reverse roles, the chiaroscuro effect of the writing turns gray. With her reed-thin voice, Nixon can’t match Linney vocally, so she attempts to humanize Regina, turning her into a far less venomous figure.

Playing Birdie against type, Linney makes the character far too headstrong. Rather than feeling pity when everyone tells Birdie to shut up, you’ll probably feel her detractors have a point.

The rest of the cast alters their respective performances not one iota in responding to these very different interpretations from the two female leads. That’s fine, unless you happen to be a theatergoer seeing the performances back to back.

That minor objection aside, Sullivan delivers a triumvirate of consummate mendacity in the perfectly wedded performances of Goldstein and McKean, playing the two Hubbard brothers, and Michael Benz, who brings utter stupidity to that table of greed in his sly portrayal of Birdie’s son, Leo. These three actors galvanize the first act of “The Little Foxes” regardless of who’s playing Regina.

In act two, Thomas takes over as Horace Giddens, giving what must be the performance of his career. His hatred of Regina is so palpable that it almost justifies her passive murder of him.