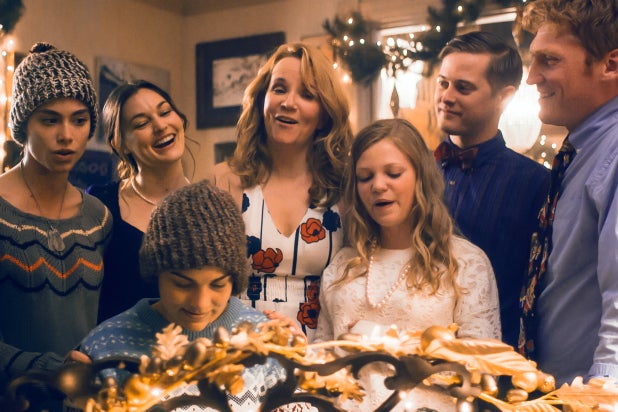 Clare Niederpruem’s adaptation of “Little Women” is billed as “the first-ever modern cinematic retelling of the classic story.” (Apparently they’re not counting the 2012 TV movie “The March Sisters at Christmas.”) This sounds like a promising approach; Louisa May Alcott’s beloved novel was published 150 years ago, yet it remains as relevant as ever.

Alcott’s books grappled with the place of girls and women (and also boys and men) in the world, so there will always be room for thoughtful adaptations of her work. Indeed, this year brought a well-received miniseries to PBS, and Greta Gerwig is currently working on an interpretation starring Saoirse Ronan and Meryl Streep. Plus, of course, parents still show kids their own favorite versions, from 1933, 1949 and 1994.

But these efforts reflected a crucial understanding missing from Niederpruem’s feature debut: that we are all Jo (or Meg, or Beth, or Amy, or Laurie). The girls in this contemporary retelling — which was produced by the faith-based company Pinnacle Peak — are not messy and complex human beings but Hallmark Channel characters, two-dimensional symbols of virtuous nostalgia.

The film jumps back and forth in time in confusing fashion, with the characters primarily embodied at different ages by the same actors. Sarah Davenport (“Stitchers”) is thus required to portray both teenage Jo and adult Jo. Unfortunately, both are played in the same wide-eyed manner, which renders her too visibly mature as a young teen and too emotionally naive as a grownup.

Davenport has also been directed to deliver every line of dialogue as a declaration of intent. This would be distracting under any circumstances, but it’s certainly not helped by the lines themselves: “I, Jo March,” she grandly decrees, “will be a very successful writer, and will do all the things.” One of these things, as it turns out, is to help poor Beth (Allie Jennings) when she gets sick. “Web MD scared the crap out of me,” Jo announces to their mother, Marmee (Lea Thompson), when she arrives at the hospital.

Moreover, Jo’s subversive rebellion — and all the girls’ moral struggles — are sanded down to anodyne blandness. When maternal Meg (Melanie Stone) breaks out of her homeschooled shell for a drunken prom party, she learns her lesson immediately, the camera mercilessly glaring at her cartoonishly vulgar makeup. There are no lessons learned from conflicting with Aunt March (Barta Heiner), because she’s become a smiley eccentric spending her retirement on cruise ships. Laurie (Lucas Grabeel, “High School Musical”) is as unthreatening a childhood crush as one could ask for. Beth, with her puppy-dog expressions and passive personality, is on a path to martyrdom from the start.

Alcott addressed issues of poverty in a way that remains utterly essential today but is similarly scrubbed from this enviably set-designed March home. The repetitious Christmas scenes in the cozy living room are shot with particular care and serve as the movie’s centerpieces. But in their enviable, Pinterest-worthy décor, they’re hardly reflective of the austere and ennobling spiritual experience readers may remember.

Watch Video: Lea Thompson on Hollywood Sexual Harassment: 'It Was Like Kryptonite'

However, as Marmee might note, we can always find a silver lining. Stone and Grabeel are standouts, their low-key presence serving as necessary correctives to the unceasing energy of a frenetic Jo. Thompson also brings some welcome warmth to the household, calmly centering so much unfocused activity. And co-writers Niederpruem and Kristi Shimek take a noticeably careful approach to the issue of the suitors, an aspect of the book that has always been a sore spot for many.

The staid and disappointing Professor Bhaer has been aged down into a handsome teacher called Freddy (Ian Bohen, “Yellowstone”), who works with Jo when she’s in her late twenties. And though young Amy (Elise Jones) always has a crush on Laurie, nothing comes of it until she’s played by the adult Taylor Murphy. There’s also some poignancy to seeing Papa (Bart Johnson, another “High School Musical” alum) Skyping in his fatigues, war being yet another timeless theme of Alcott’s.

Most of those themes, though, go unaddressed. It’s no crime to update classics, as fans of “Clueless” (or Jane Austen) and “10 Things I Hate About You” (or Shakespeare) can attest. But without a genuine respect for the author’s intent, the era is irrelevant. This version seems to have been made not to honor Alcott’s little women but instead to please the parents who want blandly wholesome family entertainment for their own. One can only imagine what Jo herself would have to say on the subject.