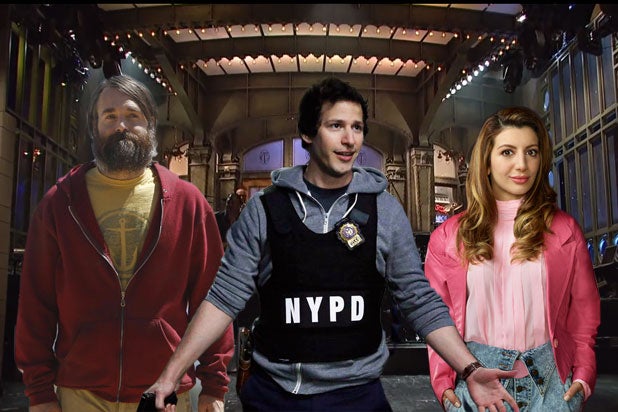 The youngest of the Big 4 networks currently has two “SNL” alums starring as leading men on its Top 2 live-action comedies, with Andy Samberg anchoring “Brooklyn Nine-Nine” (No. 2) and Will Forte playing the titular character on “The Last Man on Earth” (No. 1). Samberg’s talented showrunner, Mike Schur, also hails from Lorne Michaels‘ sketch comedy show, where he wrote for six seasons.

So why are so many players and writers ending up at Fox Co-Chief Dana Walden and Gary Newman’s network, as opposed to NBC where “SNL” actually airs?

One simple theory could be that NBC is shying away from primetime comedy, and Michael’s production company, Broadway Video, parks itself mainly in late-night. Or it’s even simpler as Samberg summed it up: “It’s as straightforward from my perspective as they wanted to make shows for us,” he told TheWrap.

“I don’t put too much thought into where something is airing, as long as it’s something that I think is going to be good, but they were really accommodating and we all liked what they had to say, and it made a good fit,” he said.

Also Read: Andy Samberg Critiques His Emmys Performance -- And Reveals the One Moment That Made Him Nervous (Exclusive)

Also joining the two guys in “Fox’s SNL Alums Club” is Nasim Pedrad, who starred on last year’s one-and-done “Mulaney,” and now has moved over to this season’s freshman horror comedy “Scream Queens” from Ryan Murphy and Brad Falchuk.

Fox-SNL connection even goes beyond the three present sitcom stars with depths of recurring actors who have made the move, including Jason Sudeikis as Forte’s “Last Man” brother, and Bill Hader guesting on “Brooklyn” as Samberg’s new captain this season.

This reunited group of merry men — and at least one woman — prove that cliche adage, which reminds us that in Hollywood it isn’t always what you know, but who you know. And in a crazy comedy incubator like “SNL,” relationships run particularly deep. So these collaborations can be partially credited to old friends simply still wanting to play together.

For his part, Samberg’s pal Forte wasn’t quite sure why the trend is happening, but he both still loves NBC and digs his new Fox camaraderie.

Forte told TheWrap: “It’s very fun to be over here with a bunch of people I’ve known for a while …. but I don’t know why that’s happened, but it has!”

“Certainly there is a part of it that’s just coincidence,” he added.

Fox’s Executive Vice President of Comedy Development & Programming Suzanna Makkos doesn’t think it’s coincidence, though. Both she and Samberg credit the aforementioned Schur for getting the “SNL”-to-Fox pipeline rolling.

“Once we started to know those people and they started to know us and were hearing such great things from their friends about the working relationship that we have here, that really seemed to open the door for a lot of things,” Makkos told TheWrap.

And the “SNL” fan is thrilled with how that’s worked out thus far. Makkos now has talent that’s been through intense comedy boot camp and is ready to roll.

“‘SNL’ is such a fantastic training ground and those people have just such great comedy chops, naturally speaking, we just tend to find ourselves gravitating towards them,” she said. Plus, “The people that have worked in that camp are such workhorses, because of the hours … there is no task that they find daunting.”

That affectionate feeling is mutual. One of the usual points of contention between comedic actors and networks is the dreaded notes situation, which at worst sees pencil pusher businessmen and women trying to tell comics what is funny and what isn’t. That’s not the case at Fox, the crossover stars say.

“The notes situation has been really positive,” Samberg told us. “At ‘SNL,’ you get notes from Lorne and from the producers and the head writers, and the network kind of steers clear because that’s such an old establishment.”

“In the early phases of the show, we did adjust a lot to make the network is happy with the show and comfortable with everything. And they gave really good, smart notes,” he continued. “I swear I’m not just saying that because it behooves me to say so. We’ve had a pretty cruising time with them.”

“We don’t always agree,” Forte said of his experience with the network and studio, “but we try to be good teammates.”

He added: “And the wonderful thing about it is if we really disagree with the note, they’ll usually just say, ‘OK, we trust ya, go for it.'”

Also Read: Inside the Emmy Awards: 11 Things You Didn't See on TV

With such glowing experiences and positive word-of-mouth, perhaps more of Forte and Samberg’s funny friends will defect from “Saturday Night Live” to Fox.

When asked who currently on “SNL” Makkos would want as a Fox talent, Makkos didn’t even hesitate: the EVP would take young stand-up comedian Pete Davidson — who was actually discovered for “SNL” at a Fox comedy showcase — in a heartbeat. But don’t presume to see Pete making the switch after Season 41 of the Saturday night staple.

“Nobody is trying to poach, I think, right now,” she said. “It’s just about relationships and how our existing talent is working with their friends who happen to be [from] ‘SNL.'”