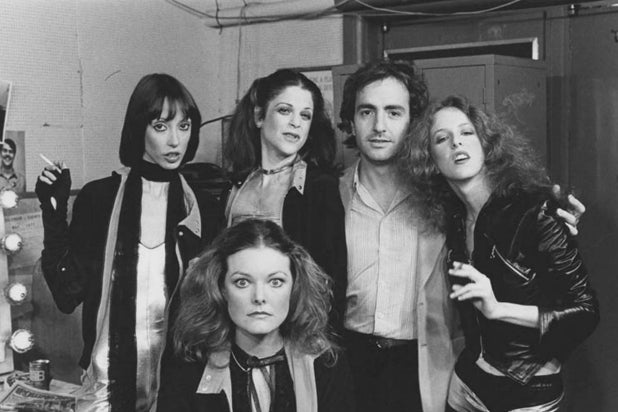 “Live from New York!” purports to be a look at four decades of the late-night comedy institution “Saturday Night Live,” but it’s basically a puff piece on the show’s longtime producer Lorne Michaels.

How do we know this? For starters, the years where Michael took a hiatus from producing (1980-1985) are blipped right over, apart from an interview with Julia Louis-Dreyfus and a few mentions of Eddie Murphy. Then the movie pretends that Michaels returned triumphantly, with the rise of Dana Carvey, Jan Hooks and Phil Hartman, conveniently omitting almost any notice of the infamous 1985-86 season under Michaels’ tutelage, the infamous year of the show that gave us cast members Robert Downey, Jr. and Randy Quaid.

Once you resign yourself to the fact that you’re watching the equivalent of a late-night informercial for the box set of “Dean Martin Roast” DVDs, however, “Live from New York!” does at least offer some fleeting glimpses at life backstage, along with reminiscences from various hosts, cultural observers and Not Ready for Prime Time Players. (This may be the only documentary ever to feature original interviews with both Bill O’Reilly and Fran Lebovitz.)

The movie does cop to some of the show’s shortcomings, like its periodic sexist and racist hiring practices, but only to a point. Production designer Akira Yoshimura, one of the few people who’s been involved with “SNL” for its entire run, remembers getting recruited to play Sulu in an early “Star Trek” sketch since he was the only available Asian working on the show; it’s a charming interview, but no mention is made that there have been no Asians in the ensemble over a four-decade run.

Director Bao Nguyen fails to explore many potentially interesting avenues, from the context of American television in the mid-1970s (which would have illustrated why “SNL,” at first at least, felt so genuinely revolutionary and groundbreaking) to where the show fits in the timeline of sketch comedy legends (from the Goon Show to Monty Python and onward). We see one clip of Michaels taking the original cast on Tom Snyder’s “Tomorrow” show and one reference to “The Smothers Brothers Comedy Hour,” but that’s about it.

For the most part, we get snippets of sketches and congratulatory (or self-congratulatory) insight from the likes of Alec Baldwin, Steve Martin, and other insiders who all have their reasons to speak fondly regarding “SNL” and Michaels. If you were expecting any of the behind-the-scenes dirt from the tell-all books by Tom Shales or Doug Hill, or even the upbeat look at the show’s mechanics from Amy Poehler’s “Yes, Please,” forget it. “Cocaine? Egos? Never heard of ‘em. Let us tell you again how we healed New York after 9/11 or invented the viral video with ‘Lazy Sunday.'”

Fans of the show aren’t going to learn much from “Live From New York!” while anyone hoping for a deeper exploration of this media phenomenon will also come away empty-handed. This fawning portrait could easily have aired on NBC the week of the big “SNL” 40th anniversary special. As a feature film for a paying audience, it’s got all the appeal of that haphazard sketch that appears after the second performance of the musical guest.