Jon Stewart’s surprise role on Jimmy Kimmel and Norman Lear’s “Live in Front of a Studio Audience” was revealed Tuesday during the “The Facts of Life” portion of the special, when the comedian showed up as a character known as “The Deadhead” who chitchats with Mrs. Garrett in the Season 3 episode that was staged.

Stewart’s appearance drew hearty laughter as he wore full orthodontic headgear, an addition to the costume that wasn’t part of the character in the original airing when played by actor Dan Frischman.

While Stewart’s casting on the ABC event was announced last week, Kimmel and Lear remained tight-lipped on who he would be playing (though our money was on George Clooney’s handyman character George Burnett) in order to keep some of that “live” magic more magical. 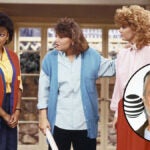 The “Live in Front of a Studio Audience” special, which marks the third installment Kimmel and Lear have done for ABC, also included the re-creation of a “Diff’rent Strokes” episode, which starred John Lithgow as Mr. Drummond, Kevin Hart as Arnold and Damon Wayans as Willis, along with Dowd returning as Mrs. Garrett in that one. Snoop Dogg was the shocker on that one, playing a friend of Willis’s. 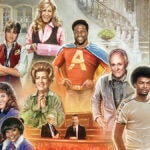 Also Read:
How to Watch ‘Live in Front of a Studio Audience: The Facts of Life’ and ‘Diff’rent Strokes’

“Live in Front of a Studio Audience” is airing now on ABC. Watch a clip of Stewart’s appearance above.