“Living,” directed by Oliver Hermanus and starring Bill Nighy and Aimee Lou Wood, comes from a screenplay that Kazuo Ishiguro wrote, adapting it into English from Akira Kurosawa’s Japanese film “Ikuru.” (“Ikuru” itself was inspired by Leo Tolstoy’s 1886 Russian novella “The Death of Ivan Ilyich.”) Nighy plays a British bureaucrat in post-World War II London whose cancer diagnosis inspires him to reevaluate his life of solitude and try to make a difference in his community before he dies. Hermanus, Nighy and Wood visited TheWrap and Shutterstock’s Interview and Portrait Studio at the Toronto International Film Festival for a discussion about the filmmaking process.

Nighy plays the bureaucrat, Williams, and he and Hermanus weren’t too worried by the legacy of Kurosawa’s original film looming over their adaptation. Having Kazuo Ishiguro’s screenplay writing helped immensely.

“We had to ask for permission, and the story is that the [Kurosawa] family did not believe that Kazuo Ishiguro was involved in this form, and he even wrote a letter saying, ‘I, Kazuo Ishiguro, am going to be writing the screenplay’ And they didn’t believe that either,” Hermanus told Senior Film Reporter Brian Welk. “So then he sent a video message of himself and that’s when the family, I think, was like — all their trust was in Kazuo Ishiguro. Like, if Mr. Ishiguro was going to do it, they felt that it was in good hands and we were all kind of protected.” 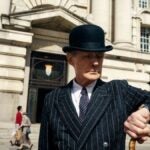 Hermanus and Nighy were both approached by producer Stephen Wooley to do the film. Ishiguro hadn’t yet committed to writing the screenplay, but Nighy recounted how Wooley persuaded the Nobel-Prize winning author to board the project. Hermanus described Ishiguro’s unique insight into the transition between the Japanese and English versions of the films.

“Ishiguro has had such success telling stories about British stoicism and the sort of nature of Britain after the war. It’s ironic that there’s such a clear connection between Japan after the war in the original film, and England after the war in our film,” he said. “Ishiguro had seen that there was such a similarity about the nature of those two societies, which although they were so different, and the war impacted them totally differently. Our two films exist as these companions of a portrait of a man in London and a portrait of a man in Tokyo, who feel the same way and have the same kind of world around them. But those worlds are completely different and the one person who noticed that was Ishiguro.”

For Aimee Lou Wood, the opportunity to work alongside Nighy was ‘amazing,’ particularly in a scene in which the actor delivers a monologue. 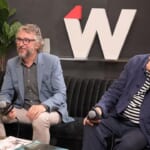 Also Read:
Steve Coogan on the ‘Unexpected Twists and Turns’ of the Real-Life Story Behind ‘The Lost King’ (Video)

“It was just pages and pages of monologue and, obviously, beautifully written,” she said. “But I just believed every single word and I remember leaving that day going, I’ve never seen acting that incredible up close. Like, it was just phenomenal. When I say I was sobbing, there were people running in with tissues constantly because I couldn’t stop. And then when I got home, I just kept crying and even now I’m on the verge of tears. So I’m gonna stop talking.”

Nighy was drawn to his character’s ordinary heroism, even though the role was more somber than previous comedic characters he has played.

“I looked for laughs, but there weren’t any. No, I suppose sometimes you feel safer if you’ve got a few jokes, obviously. The challenges, I suppose, were to express quite a lot with a little,” he said. “That was my mission, and to expand to fully express the emotion involved. There is a lot of heroism going on in the world — decent people just doing the next right thing, trying to raise their families, trying to go to work — and I see him as a character of that kind. I have a great enthusiasm for that and for that kind of heroism, just normal people getting through life. Also it’s about procrastination, which — I’m Olympic in terms of procrastination. And I know it’s the great corrosive element in our lives. And I think this film addresses that very, very well.” 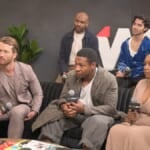 Hermanus expressed a similar sentiment about the film as a whole, simmering it down to incremental living and small daily actions versus our social media self-obsessed world today.

“The opportunity with ‘Living’ as a film is that it allows us to send a message about living a life of incrementation where you are satisfied with that deal of being a small part of something a small part of a bigger picture,” he said. “We live in a world today where people are trying to build monuments to themselves with hundreds of millions of thousands of Instagram followers and wanting to be celebrated in a way that that is kind of sort of very sort of self-interested. There’s something about our film, which is about a man who feels that if he does something within his arm’s reach that that will be the most satisfying thing he can do, and it might never be remembered, but it is a stronger message about the value of life.”