The latest episode of “SNL” compared Liz Cheney to Rachel Dolezal, a woman who stirred controversy in 2015 for self-identifying as an African American despite being a white woman.

During a sketch featuring a game show called “Republican or Not,” hosted by a character played by Kenan Thompson, contestants were forced to guess whether a person was a Republican or not based on short statements like “I think Facebook is evil” and “I respect pro athletes who stand up for their beliefs.” In response to the former, a contestant played by host Simu Liu asked, “Because they’re spreading misinformation or because they banned Donald Trump?”

After the person said, “I hate cops,” a contestant played by “SNL” cast member Ego Nwodim guessed he was a Republican, but Thompson’s host revealed the man was talking about these cops, throwing to a photo from the Jan. 6 insurrection at the capital. 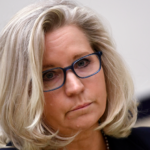 The final person to come on the show was Liz Cheney, played by Cecily Strong, who stated, “I’m a congresswoman from Wyoming. I’m endorsed by the NRA and I have an 80% rating from the American Conservative Union,” before adding she’s the daughter of Dick Cheney. But when Liu’s contestant guessed she was a Republican, Thompson’s host said he was wrong. “The Wyoming Republican Party actually voted Representative Cheney out this week for opposing Donald Trump,” the host explained.

When Cheney protested that she’s actually a Republican, Thompson hit back: “You might tell everybody that, but it’s not what other Republicans say. Like it or not, you are the Rachel Dolezal of the Republican Party.”

After one final protestation, Thompson delivered the kicker: “We will see you on MSNBC in about a week.”

Cheney has faced severe pushback from conservatives for refusing to support Donald Trump, and for voting to impeach him. On Nov. 13, the Wyoming Republican Party formally voted to cease recognizing Cheney as a republican.

Watch the sketch in the video above. 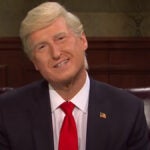