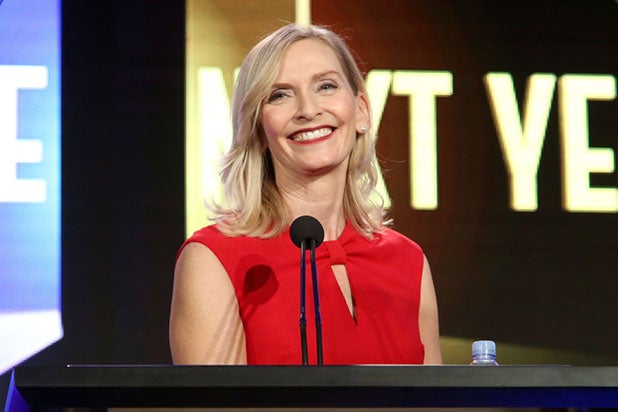 Lifetime’s head of programming Liz Gateley has stepped down after three years, the network announced on Thursday.

Citing personal issues, Gateley announced in a memo to staff that she would be leaving the network to focus on her family, but will remain on board for a few “exciting passion projects” which have yet to be announced.

In her place, Lifetime has promoted Tanya Lopez to executive vice president, giving her oversight of movies, limited series and movie acquisitions at Lifetime and LMN.

Gena McCarthy, currently executive vice president of programming at sister network FYI, has expanded her role to include head of unscripted programming at Lifetime.

Joanna Klein will continue to oversee scripted series at the network.

“I would like to thank Liz for her enormous contributions to Lifetime, and I am glad she will continue to lend her expertise on some upcoming projects for us,” Nancy Dubuc, A+E Networks president and CEO, said in a statement. “I deeply respect her choice to spend more time with her family. I also echo Liz’s delight, and I am personally proud that three strong women will be leading Lifetime’s programming teams. Congratulations to Tanya and Gena on their promotions.”

“We are incredibly excited to have Tanya, Gena and Joanna heading up our programming efforts for Lifetime,” said Paul Buccieri, president of A+E Studios and A+E Networks Portfolio Group,
and Rob Sharenow, president of programming at A+E Networks, in a joint statement. “The passion and creativity they bring to the table is unmatched, and their track records speak volumes, as this team has brought some of the biggest hits in women’s entertainment to Lifetime throughout their careers.”

Gateley assumed her role as head of programming at Lifetime in 2015 and helped usher the cable network into the scripted series space with shows like “UnREAL” and “Mary Kills People,” as well as the upcoming series “YOU” and “American Princess.”

Many of you know what has been going on in my life in the past several months. With the sudden passing of my beloved nanny of 16 years, a new nanny being a no-show and ghosting me, having stressed-out teenage kids and having to lift my dog to the curb because he has a slipped disk (I kid you not!), there have been some very clear signs from the universe to focus on my family and truly be present every day for my kids and husband, who have very generously supported a career choice that required me to fly across the country every other week for the past three years. So it is with a heavy heart that I must say that I have decided to leave my position at Lifetime. This was a dream job for me: to come back to the brand I love, where I started out 17 years ago as Assistant to the Head of Programming, and to BE the Head of Programming. It was my Working Girl moment. I am so grateful to Rob and Nancy for this opportunity.

During my three years here, I had the privilege to launch UnREAL, making the (at the time) scary decision during my first week here to launch the first three episodes digitally and then lobby for and develop three more seasons of the hit Peabody-winning show. I also had the luck to work with Meghan Hooper White and Sharon Bordas on another show that landed on every “Top 20 of the Year” list: Mary Kills People. With Joanna Klein leading her amazing team, I am proud to have attracted showrunners like Greg Berlanti, Sera Gamble and Jenji Kohan, solidifying Lifetime as a premium scripted destination. I cannot wait for the world to see the upcoming YOU and American Princess.

I am also excited that, with the leadership of Tanya Lopez and Meghan, Lifetime Movies has taken on new levels of brave storytelling (and success in the ratings!) with the award-winning and inspiring true stories like Flint, Surviving Compton, Cocaine Godmother, I Am Elizabeth Smart and Faith Under Fire. I’ll never forget Lifetime’s proud coverage of the historic 2016 Election Live with The View, the launch of unscripted hits like TheRap Game, events like Billboard Women in Musicand zeitgeist moments likeGlam Masters. My favorite failure, Date Night Live, was a proud galvanizing moment while Project Runway in its 16th season embraced body diversity with“models of all sizes” for the first time. I know Brie Bryant will do amazing things to launch her inspiring vision in the next chapter of Unscripted at Lifetime.

I also love the new faces of Lifetime — Laverne Cox, Penn Badgley, Shay Mitchell and Catherine Zeta-Jones (and don’t forget Meghan and Harry!) — but perhaps my favorite thing in the world is to give people their first chance at something.   This job gave me the opportunity to give deserving WOMEN their first chances: Shiri Appleby and Constance Zimmer directing episodic television (and they did a damn good job), Stacy Rukeyser showrunning, Kyra Sedgwick directing Story of a Girl and getting a DGA nomination, and finally, presenting what had to be the first ever 100% all-female series creator panel at TCA.

I am so happy to have had the opportunity to work with Rob Sharenow and Paul Buccieri to establish the structure of Lifetime’s programming team going forward. I am excited that Tanya Lopez will continue to oversee all the movies including our originals and will be adding acquisitions to her purview. Gena McCarthy will return to Lifetime to lead Unscripted Programming, and Joanna Klein will continue to oversee Scripted Series. I love that Lifetime’s programming future will be controlled by three powerful women who love the brand as much as I do.

And here’s to the F word. For me, this letter conjures up many fond words.: Fempire. Flint. Faith Under Fire. Our muse: the “Fireheart.” But most importantly, the incredible Friends I’ve made here and will miss. Keep fighting the fight for #MeToo and #TimesUp, as we have always been the leaders of equality for women. In fact, there are some exciting passion projects of mine in this space that we are about to announce, for which I may stay on board.

You have and will change the world, Lifetime. You have changed mine.