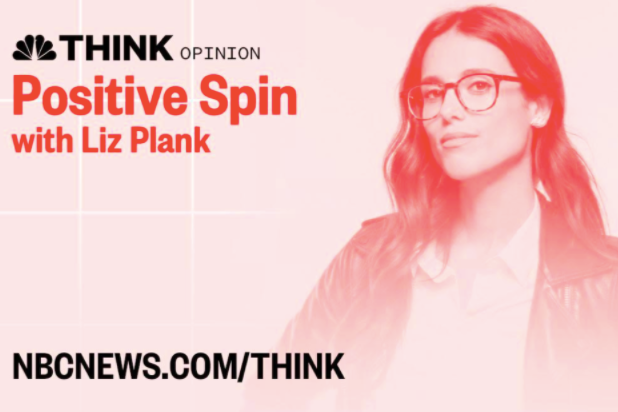 The three-episode series looks at life during the coronavirus pandemic. Plank, formerly of Vox Media, filmed the whole thing while quarantining in California and kept safety top-of-mind while tackling why men are less inclined to wear masks, how people are dating in a pandemic and what the protests against racism look like from the ground level.

“I’ve been going through this dynamic — along with the rest of us — and it became very clear to me that that there were a lot of people who were suffering, a lot of people in pain, a lot of people who were scared,” Plank told TheWrap in a call before the show on NBC News’ opinion platform launched. “I just like to put a positive spin on things. I like to reframe things for my own sort of mental health and personal wellness and I started to think about what a show could look like.”

In reality, she’d been thinking about a show with NBC News for some time… just not one having to do with the coronavirus. After appearing steadily on MSNBC since 2013, Plank was approached in January to consider some sort of digital offering for the company, but when the pandemic hit, she thought that was off the table, but executives, she said, told her that her ideas for a “good news”-focused show were needed now more than ever.

Although it was difficult to pull of a show while social distancing and maintaining safety requirements, quite a few elements fell into place for Plank and her producing partner, Ashley Bearden.

For the dating episode, which will be the first to premiere, Plank went on a socially-distanced first date… then a second… and a third. She’s still dating the man who was game enough to film their first date.

Also Read: How Courteney Cox and Her Team Relied Upon 'Experimental Production' for Pregnancy Docuseries Amid Coronavirus

Another coincidence came when she was conceptualizing the episode on the fight against systemic racism, which frames racism as yet another deadly pandemic America faces.

“In L.A., the protests were literally down our street, on the first night of protest there was a cop car on fire. I was watching [NBC News’ Gadi Schwartz], and I was like, ‘That’s my street corner,'” Plank said of the demonstrations that came after the Memorial Day police killing of unarmed Black man George Floyd.

For the episode on the masculinity of masks — which tied in with the book Plank published in September on modern masculinity — she didn’t stay as close to home. She and Bearden secured a secluded ranch and an interview with Wade Davis, an openly gay former NFL player who is now a consultant on diversity for Netflix and Google.

“He literally did a TED Talk called ‘The Mask of Masculinity,’ which was so perfect,” she said.