Lizzo took the stage in one of her first concerts for her “Special” album tour in Washington D.C. Tuesday night, and she brought a 200-year-old crystal flute that belonged to President James Madison onstage for a historical musical moment.

“Bitch, I’m scared,” the “About Damn Time” singer said into the microphone before adjusting her fingers on the delicate relic, which was loaned to her under the supervision of the Library of Congress.

It’s common knowledge that Lizzo is a singer as well as a flautist, and her short medley on Madison’s flute made the Grammy and Emmy winner the first person to play the instrument in concert, and her audience were among the first people to hear it.

“It’s crystal, it’s like playing out of a wine glass bitch so be patient,” the Yitty shapewear founder added before playing a clear note followed by a vibrating note while she shook her body in her signature twerking style.

According to the Library of Congress, the flute was made in 1813 and given to Madison by famed Parisian watchmaker and mechanic Claude Laurent. “It’s not clear if Madison did much with the flute other than admire it, but it became a family heirloom and an artifact of the era,” its official site reads. It was later rescued by Dolley Madison from the White House in April 1814 when the British invaded D.C. during the War of 1812. 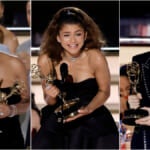 “Bitch I just twerked and played James Madison’s crystal flute from the 1800s,” she exclaimed after handing the instrument back to personnel in charge of it.

The Library of Congress detailed how this all came together, and it started with a tweet in which librarian Carla Hayden tagged Lizzo after she saw that the performer was headed back to D.C. for a concert. That led to Lizzo responding, “I’M PLAYIN THAT CRYSTAL FLUTE!!!!!,” and being invited to the Library of Congress to see the instrument firsthand.

“When Lizzo asked if she could play the flute at her Tuesday concert in front of thousands of fans, the Library’s collection, preservation and security teams were up the challenge,” the site reads. 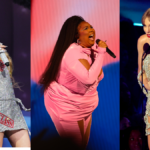 Also Read:
The Best and Worst Moments of the 2022 MTV VMAs
x