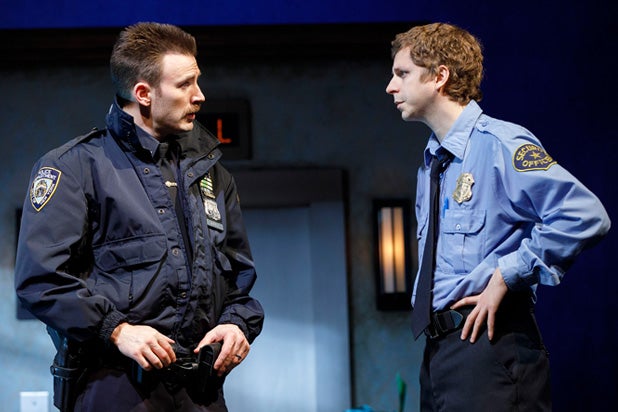 Michael Cera is not a transformational actor. Whether in film or on Broadway in his 2014 debut, “This Is Our Youth,” he repeatedly embodies the beta male. Nothing wrong with that. Several comic geniuses, from Charlie Chaplin to Woody Allen, present a defined persona over and over again and yet dazzle with their delivery and timing. Kenneth Lonergan’s “Lobby Hero” opened Monday at Second Stage’s newly renovated Hayes Theater, and the role of the insecure security guard Jeff fits Cera as tightly as the blue collar and black tie the character wears every night manning the front desk of a large New York apartment building.

Jeff is the polar opposite of Lonergan’s troubled Lee Chandler character in the 2016 film “Manchester by the Sea,” and yet their situations are nearly identical. While Lee is a hot head, Jeff is subdued to the point of somnambulism — he sleeps on the job — but like Lee, Jeff finds himself struggling to correct his life after a personal tragedy.

Unlike Lee, he is very funny, at least, as played by Cera, and in true beta male fashion, he never cracks a joke or delivers a one-liner. His humor is more subliminal, his wit a sign of sexual desire and ambition that only occasionally manages to break the otherwise mundane surface that the character presents to the world.

It would be impossible to take Jeff/Lonergan’s humor and print a joke here. In “Angels in America,” Tony Kushner has all kinds of laugh lines that come from a character mentioning such easy targets as “Cats,” Grace Jones, Mormons, Dr. Ruth Westheimer and Salt Lake City. How Broadway audiences love it when characters put down any place west of the Hudson River.

In “Lobby Hero” there are no lines to punch, and Cera repeatedly manages to let his character’s jaundiced take gently seep to the surface when we’re least expecting it.
“Lobby Hero” is the exploration of Jeff’s humiliation at the hands of two men he doesn’t respect.

There’s the professional humiliation that his immediate boss William (the excellent Brian Tyree Henry, of “Atlanta”) induces. Since they’re both security guards, Jeff wants to know why Williams gets to call himself “captain.” And then there’s the sexual humiliation induced by Bill, a cocky police officer whose badge (unlike Jeff’s) means something, and more importantly, who’s having an affair with the rookie police officer, Dawn (Bel Powley, “The Diary of a Teenage Girl”), whom Jeff secretly lusts after from behind his front desk.

In his Broadway debut as Bill, Chris Evans presents the ultimate alpha male, assured of his sexual prowess in ways that the Jeffs of the world can’t even imagine. Evans doesn’t let his absurdly macho façade crack even when Dawn finds out that his trips to the 22nd floor in Jeff’s building aren’t for business but sex and he has to admit, “I’m busted.” Some movie stars make the segue to Broadway in high style.

When an offstage murder occurs, Lonergan uses Bill and William to put the squeeze on Jeff, and Trip Cullman’s direction induces the appropriate claustrophobia. What unfortunately lets some oxygen into that situation is Powley’s Dawn. Unlike her co-stars, she’s broadly comic with her saucer eyes and baby-doll delivery.

At one point, Bill criticizes his young female partner as being “pig-tails in a uniform,” and that’s precisely what Powley presents: a rookie in way over her head. It’s like Blanche du Bois describing her brother-in-law as being an ape, and then Stanley Kowalski showing up in a gorilla outfit. Dawn, in the end, is anything but a wuss.