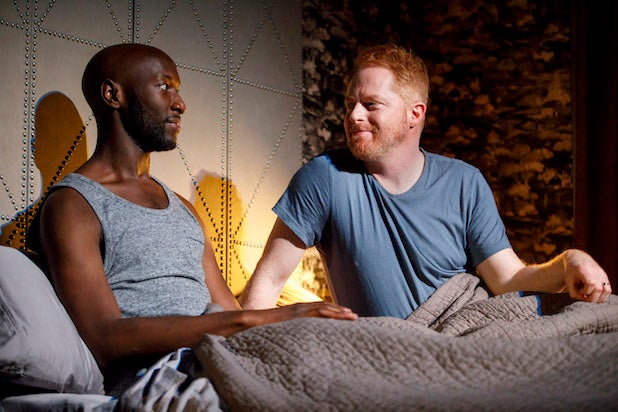 When the adult actor Ian Harvie first appears on stage, he’s playing a one-year-old child. He speaks, but that’s merely a theatrical device. His speech is what the baby is thinking. Harvie as the baby appears a few more times in Jordan Harrison’s new comedy, “Log Cabin,” which opened Monday at Off Broadway’s Playwrights Horizons. Around the kid’s fourth birthday, Harvie is joined by another adult actor, Phillip James Brannon, playing a one-year-old. They speak to each other, but again, not really. We’re supposed to be reading their thoughts. In other words, a play that begins as an audacious piece of theater ends up being the stage version of “Look Who’s Talking.”

Harvie plays the child of a lesbian couple, Pam (Cindy Cheung) and Jules (Dolly Wells), who are close friends with a gay couple, Ezra (Jesse Tyler Ferguson) and Chris (the double-cast Brannon). Brannon, when he’s playing an infant, is the son of Chris and Henry (the double-cast Harvie), who is a transgender woman and the high school friend of Ezra, which somehow gives Ezra the license to ask Henry if he’d go off the testosterone just long enough to have his and Chris’ baby. Despite the T, Henry still has a working uterus.

Much of this plot-twisting is very funny. Harrison (“Marjorie Prime,” “The Amateurs”) is an immensely talented writer, and he knows how to explode the theater not only with one-liners but with the delayed retort that hits the bulls-eye without the target ever knowing it.

With “Log Cabin,” Harrison also exposes his tendency to telegraph where his play is going and sermonize. In the play’s opening scene, Chris and Ezra are upset because Ezra’s doctor dad isn’t overjoyed about their getting married. But too quickly for the play’s own good, Ezra confesses that he can’t get his head around his high school prom date, Helen, now being a guy named Henry, who is living with a somewhat younger woman named Myna (Talene Monahon), who has a history of dating transgender men.

When this group of six finally gets together, there’s all sorts of scrambling to climb to the moral high ground and accuse someone else of being the bigot at the party. For example, Chris resents Henry calling him a “cis male” because that lumps him in with all the racist heterosexuals who used the N-word and the F-word to describe him in high school.

As if the plot needed more twisting, two of the characters cheat on their respective spouses. These sex episodes (one off stage) come out of nowhere, as they often do in real life. We might accept this extracurricular sex if only Harrison had spent less effort with his plot and more stage time developing his characters.

The very talented cast almost makes us believe we’re watching fully developed characters and not mouthpieces for the playwright’s polemic. A late-in-the-play sermon about creating your own concept of marriage is sticky sweet.

Pam MacKinnon deserves much credit for the fine-tuned ensemble. Her direction, however, is hampered by designer Allen Moyer’s slow-moving turntable of a set. Its ominous, monolithic presence often moves the comedy off stage when the thing rotates.