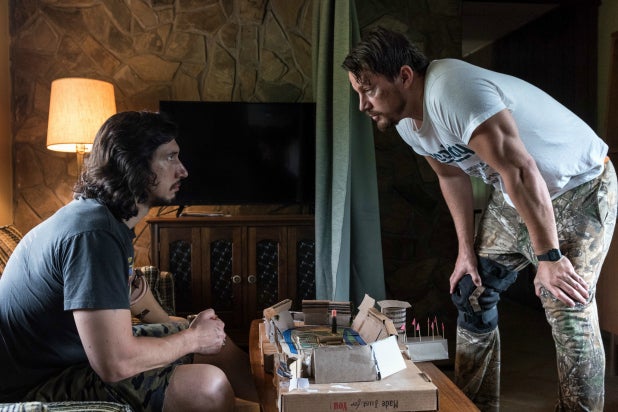 The biscuits-and-grits comic caper “Logan Lucky” is Steven Soderbergh’s return to movies after a self-imposed retirement from feature directing that no one really believed he would adhere to — especially considering how well-received his TV forays were during that time. (They included the strange and gaudy “Behind the Candelabra” for HBO and the evocative, period-immersive Cinemax series “The Knick.”)

Like the proverbial top-drawer safecracker drawn by the lure of a juices-invigorating job, the “Ocean’s” movies’ steward has given first-time screenwriter Rebecca Blunt’s race-car robbery romp his undivided attention, and produced a precision-timed entertainment that, if not among his best efforts, counts as a spirited welcome-back party of sorts.

At its best, “Logan Lucky” feels like a muscle-flexing variety show of the elements at which Soderbergh excels: crisp shotmaking (again, he’s his own DP), sleight-of-hand editing (ditto), dry humor, stars at their most winning (like Soderbergh fave Channing Tatum), and electric sequences that hum with suspense and detail. (Even breezy verisimilitude: you could separate several punchy track-centric montages and they’d stand on their own as impressionistic shorts on the trappings of a NASCAR event.)

Tatum, trading in the agile, hardbody glisten of “Magic Mike” for the earthy sturdiness of a blue-collar single dad, plays Jimmy Logan, who works under the famed Charlotte Motor Speedway fixing sinkholes, but with a not-too-disguised limp. When he’s canned for not initially reporting the injury upon hiring, then hit with the news that his well-to-do ex-wife (Katie Holmes) is moving to West Virginia with their adorable, pageant-prepping moppet of a daughter (Farrah Mackenzie), Jimmy turns his energies toward recruiting a crew to rob the Speedway on the day of the popular Coca-Cola 600 NASCAR competition.

First up is convincing his paranoid, stone-faced brother Clyde (a patiently intoning Adam Driver), a prosthetic-forearm-sporting bartender and former cohort-in-crime. Clyde believes their family is cursed, but Jimmy’s organizational attention convinces him to pitch in. Next up is bringing in eccentric explosives expert Joe Bang (Daniel Craig), who first needs to be broken out of prison. Rounding out the sextet of redneck thieves are the Logans’ no-nonsense hairdresser sister Mellie (Riley Keough), and Joe’s scrawny brothers (Jack Quaid and Brian Gleeson), first seen playing horseshoes with toilet seats at a county fair.

Though the reality of working-wage hardship spurs the crime, and the job itself involves a kind of cash-poor ingenuity — a bomb made of gummy bears and bleach, for example — “Logan Lucky” is no “Hell or High Water,” using the trappings of genre to sneak in socioeconomic points. (Or, in the case of “Talladega Nights,” cultural-political satire.)

This is more like a sprightly flyover rebuke to high-tech heist flicks in which flashy communications and state-of-the-art gadgetry do most of the work: less “Ocean’s Eleven” than “Jimmy’s Six-Pack.” (Even the cash transportation system being infiltrated is old school: pneumatic tubes.) Of course, there’s a level of tactical sophistication to this kind of fantasy-crime scenario, but Blunt’s screenplay scores many points by making the follow-through of the plan so damned pleasurable, from the use of painted cockroaches to a hilarious ransom demand involving George R.R. Martin’s long-delayed “Game of Thrones” books.

Performances do their part, too, while Soderbergh builds his mousetrap of interlocking, elegantly assembled parts rhythmically scored to David Holmes’ rootsy-funky grooves. Tatum is good in his agreeably charming way, but he’s almost pushed aside by the southern-fried eccentrics in his orbit. Driver manages to make a drawling deadpan seem almost showy, while Craig fuses panther-ish intensity and jittery looniness into something that can only be called the anti-Bond; it’s as if he’s auditioning to be a Coen brothers regular. Keough, on the other hand, foregoes quirk for magnetically steely determination — her fierce-eyed, white-booted Mellie always looks ready to run her own crew someday.

Also Read: Channing Tatum Is the Best Dad Ever in Empowering Open Letter to Daughter

Outside the gang, Seth MacFarlane hams it up efficiently as an arrogant British racer who runs afoul of the brothers, Katherine Waterston makes the most of her handful of scenes as a flirtatious mobile healthcare provider, and Dwight Yoakam earns well-timed laughs as an ass-covering prison warden. The only head-scratcher of a character is Hilary Swank’s late-act investigator, a role the Academy Award-winner gives amusingly stoic credence to, but which seems designed to pay off only if there’s a sequel.

The last rule on Jimmy Logan’s list for pulling off a successful robbery is “Hang up, and know when to walk away.” It’s a fitting nod to Soderbergh’s own love/grrr relationship with filmmaking that it wasn’t the promise of a Great American Movie that brought him out of retirement, but the chance to strut his stuff with recognizable ingredients. As summer movies go, “Logan Lucky” is especially tasty bar food, slung by a master.